Report: Clusters of Social and Ecological Innovation in the European Union, perspectives and experience 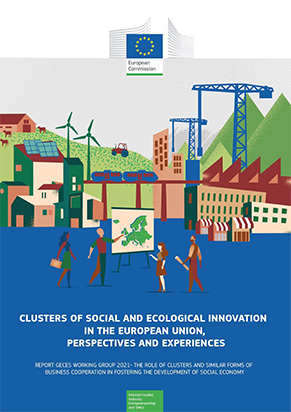 This report identifies the model of Clusters of Social and Ecological Innovation (CSEI) and explores their presence across the European Union. The analysis had the following objectives: 1) To obtain a socioeconomic characterisation of the CSEI concept; 2) To identify and analyse the main innovative aspects that CSEI contribute to social and ecological transitions; and 3) To identify and analyse the clusters’ features, components and/or determinants that allow innovation to be disseminated and transferred to other contexts.

After a literature review, a simple multiple-case study was conducted, based on 30 potential social economy clusters, identified and selected in 13 European Union member countries. The case study used a questionnaire, created and filled in by the GECES members. Data was subject to content analysis and descriptive statistical analysis.

In the second phase, further research was carried out on the topic to find out how CSEI emerge and what type of activities and services they provide to their members and communities, including several policies that may benefit clusterisation and CSEI.

On the basis of the identifiers and the many activities of the working group, more CSEI were added to an expanded list of 70 cases.

Main results of the report

Social economy “clusterisation” is a recent and growing social movement in the European Union. Almost all clusters comply with the multi-partnership approach, as they bring together at least 2-3 types of actors in their membership. Almost half of the sample brings together 3 to 6 types, which shows broader and more complex forms of cooperation among social economy entities, traditional profit-seeking companies and other supportive actors, such as public authorities, educational institutions, and research centres. Many CSEI have the specific feature of including civil society organisations, though mostly on an informal basis.

Job creation and local economic development are the most pursued priorities. Another priority is simply developing the local or regional “social economy ecosystem” in itself by creating favourable conditions and means of support. However, in most cases this is linked to a societal or political ambition such as social inclusion, job inclusion, education, promoting an ecological and circular economy, etc. In few cases the initiatives are purely private.

The majority of CSEI present a financial model characterised by multiple sources of income. Support for public resources is present in most of the cases, for some on a structural level and for the majority through project funding. Other resources are member contributions, loans and private donations.

CSEI can be a vehicle for financial opportunities (e.g., project funding, crowdfunding, public-private investments) and are used to pool financial resources for the social economy or specific projects with a leading role of social economy actors.

For the vast majority of clusters, their activity is confined to a political-administrative jurisdiction or boundary, making the “proximity” element important.