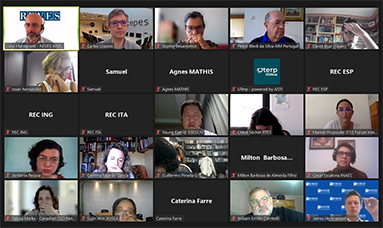 The third meeting of the project ‘Promoting legal frameworks favourable to the Social Economy‘, led by CEPES in the framework of the OECD Global Action for the Social Economy, was held on 7 September. CIRIEC-International participates in the project as scientific partner, through professor and legal expert Gemma Fajardo (University of Valencia, IUDESCOOP and CIRIEC-Spain). The meeting was attended by 35 participants from 25 organisations supporting the project, including public and ministerial departments responsible for Social Economy from six countries (Brazil, Canada, Korea, Italy, Mexico and Spain). The project is funded by the European Union.

According to CEPES, this third meeting identified and analysed legislative areas which, although not specific to the Social Economy, are strategic for its development and are emblematic for understanding how these enterprises should be taken into account when regulating and facilitating the operation of all business models in the market.

One of the areas on which the meeting focused was how the Social Economy forms part of the different public procurement policies applied by local, regional or state public administrations on the three continents to achieve economic, social, sustainability or social inclusion objectives. As indicated by Professor Fajardo, among other measures, it is worth highlighting the market reserve in favour of social inclusion economy enterprises; the obligation to include social clauses such as the one that obliges contractors to subcontract to social economy enterprises (Circulaire Gouvernement Région de Bruxelles, 26 November 2020), or those that incorporate as a model of responsible public procurement those made to socially useful solidarity enterprises (Loi française Climat et Résilience 2021-1104 of 22 August 2021).

On the other hand, it was also discussed how different legal frameworks take into account the particularities of companies of this model in terms of their specific tax treatment, transferring experiences to other countries that seek to adopt legislative measures in line with the characteristics of Social Economy companies. The specific tax treatment is conceived, as Agnès Mathis, Director of Cooperatives Europe, pointed out, not as an advantage but as the appropriate adaptation of the tax system to the limitations of these companies.

Financing was another of the topics discussed. Thus, the discussions focused on existence of innovative financing mechanisms promoted directly not only by the Administrations for the Social Economy, but also by these enterprises, because they are better adapted to the demands of a more responsible and transparent financial market. Others shared the experience and regulation of credit cooperatives and community banks; social bonds, microcredits and social currencies. Roser Hernández, Deputy Director of Social and Solidarity Economy and Cooperatives of the Generalitat de Catalunya, stressed the importance of training in ethical finance not only at university, but also in schools.

The participants also explained the functioning of support and development programmes for the Social Economy. They agreed on the importance of having not only funding, but also programmes to accompany entrepreneurship, the creation of decent employment in the Social Economy, and the visibility of this business model. The promotion of the social economy is sometimes linked to other more or less similar realities, which also received attention, such as the solidarity economy and the popular economy, which is very present in countries such as Brazil.

The President of CEPES, Juan Antonio Pedreño, pointed out that the specific experiences presented by public authorities from Belgium, Brazil, Canada, Korea, Spain, France and Italy “confirm that administrations at all levels and all regulatory frameworks governing socio-economic policies must take into account Social Economy business models. Understanding it in this way is key not only to regulate its functioning in the market, but also to promote in a transversal way a business model that is key to ensure a fair exit and a sustainable transformation after the COVID crisis”.

More information on the project

The international consortium piloted by CEPES is made up of a total of 25 partners from public and ministerial departments in Belgium, Brazil, Canada, Korea, France, Spain, Italy and Mexico, and, together with CEPES, organisations in the field of the Social Economy from Canada, the United States and the European Union, as well as the ILO, the ICA, CIRIEC-International, AIM and the Global Forum of the Social Economy.