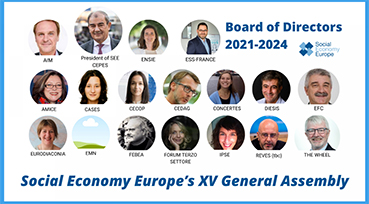 XVth General Assembly of Social Economy Europe was held on June 8 as hybrid event in Brussels, at Solidaris Mutual. Juan Antonio Pedreño, President of CEPES, was re-elected as SEE President for a three years mandate alongside with the same team of Vice-Presidents: Alain Coheur (AIM), Patrizia Bussi (ENSIE) and Jérôme Saddier (ESS-France).

At the heart of the Future of Europe

As stated at the event, Social Economy is a citizens’s-led movement based on collective entrepreneurship, democracy, solidarity, and engagement with the local communities. Principles that -transformed into action- produce economic and social progress, innovation, quality jobs, just transitions, welfare and social protection, quality social services, sustainable finance, equal opportunities and more. Together with its members, building alliances and synergies with initiatives as La République de l’ESS, led by ESS-France, and Economiesociale.be led by ConcertES, SEE will be launching an ambitious campaign under the motto #SocialEconomy4Future.

Patrizia Toia (Member of European Parliament) also congratulated SEE and its members, as well as the whole social economy community, for their role during the pandemic: “You have conquered a seat at the table. You can build an EU combining innovation and dynamism with humanism”.

SEE President Juan Antonio Pedreño declared: “Thanks to all SEE members for their trust and support. The next three years are of outmost importance to scale up the Social Economy and overcome historic obstacles: the social economy should be recognized in the treaties, we should have a seat at the inter-sectorial social dialogue, we should further contribute to just Green and Digital Transitions and to strengthen our European project: a project of democracy, peace and solidarity, a catalyst of economic and social progress for all”.

The new Board of Directors of all SEE members: