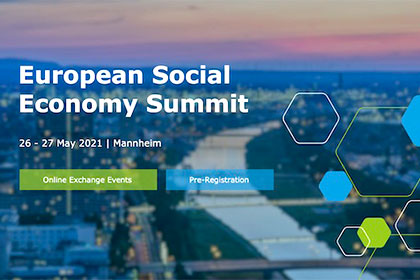 The European Social Economy Summit, initially scheduled for November this year in Mannheim (Germany), has been rescheduled for 26 and 27 May 2021. Organised by the European Commission, the summit aims to strengthen the social economy in Europe and take advantage of its contribution to economic development, social inclusion and ecological and digital transitions.

The European Social Economy Summit (#EUSES) is a conference organised jointly by the European Commission and the City of Mannheim. The discussions will focus on three dimensions: digitisation of the social economy, social innovation, and collaboration between countries and between sectors. The #EUSES is an opportunity to bring together all actors active in the social economy to discuss the major challenges of the moment.

The summit, which should have taken place in November 2020, with the Covid-19 crisis has been rescheduled for 26 and 27 May 2021. Since last September, the summit has been holding preparatory on-line seminars, under the label #RoadToMannheim, in which different European social economy actors inform and give their opinion on key issues of the moment, including the impact and responses of the social economy to the crisis of the pandemic, the role of the social economy in the fight against climate change and the inclusion of vulnerable people.

In upcoming online events, from December to March, topics such as the role of the Social Economy in the health and social protection sector; Education and digital training, and the social economy in times of environmental challenges and climate change will be discussed.

The Summit will bring together public and private actors, civil society representatives and academics to discuss the future, network, inform and increase the visibility of social economy and social enterprise policies, with the aim of exchanging good practices and success stories and supporting peer learning.

From the #EUSES Summit you are invited to participate and register for the Event. Pre-registration for the European Social Economy Summit is free. Later on, the organizers will inform about the final registration process.