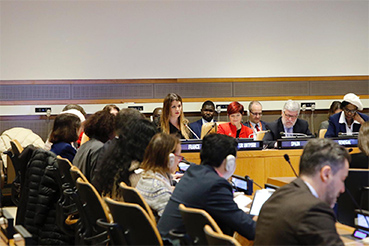 On 13 December in New York, the United Nations held the second Conference to work on a United Nations Resolution on the Social Economy, which it hopes to approve in June 2023. This was stated by representatives of countries from all over the world at this event, promoted by the governments of Spain, France, Senegal and Chile with the support of the United Nations Inter-Agency Task Force on the Social and Solidarity Economy (UNTFSSE).

The event was held under the title ‘How can the international recognition of Social Rights and the Social and Solidarity Economy (SSE) contribute to achieving the SDGs through social and inclusive innovation’. The aim was to raise awareness on the positive impact of social economy development, and how it can contribute to achieving the SDGs and make countries’ recovery more inclusive, resilient and sustainable.

Among other representatives, the Spanish Ambassador to the United Nations, Agustín Santos, spoke, recalling the urgency of taking measures in response to the problems of unemployment and social exclusion that exist on an international scale.

His Senegalese counterpart, Aminata Ly Diop, and the French Minister for the Social and Solidarity Economy and the Voluntary Sector, Marlène Schiappa, also took part. Both of whom agreed on the strength of the social economy in resolving the needs and problems of individuals and groups.

During the first panel of the day, entitled ‘What is the social and solidarity economy and why is it important for the UN’, experiences were shared from different countries that are making progress in strategies to promote this business model, such as Slovenia and Costa Rica.

“This resolution is an opportunity to place the social economy at the heart of the 2030 Agenda and the SDGs. A business model that contributes to reducing inequalities and is at the forefront of fair green and digital transitions,” he concluded.

Meanwhile, the President of CICOPA (the ICA’s industrial and service co-operative sector) and Director of Institutional Relations at the Mondragón Corporation, Íñigo Albizuri, insisted on the importance of including the values of the social economy in the educational curriculum, since, he said, “our students are still learning 19th and 20th century models, focused exclusively on obtaining maximum economic profit”.

He also insisted on the need for ad hoc legislation on the social economy in the different countries and for social economy organisations to be represented at the social dialogue tables. He also stressed the importance of promoting youth entrepreneurship and creating connected ecosystems “to support each other”. Finally, he gave a couple of examples that contribute to meeting the challenges of the green and digital economy: the creation of energy communities and the promotion of platform cooperatives.