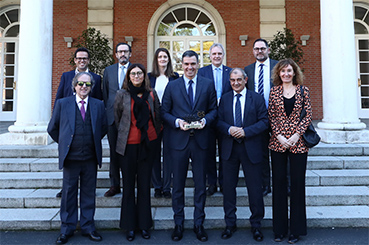 On 23 January, the President of the Spanish Government, Pedro Sánchez, received Social Economy Europe (SEE) and CEPES at the Moncloa Palace, in Madrid, to discuss the key role of the social economy in the framework of European policies and the Spanish Presidency of the Council of the EU, which will take place in the second half of this year.

During this semester, important events will take place, such as the European Social Economy Conference, which will be held on 13 and 14 November in Donostia – San Sebastian, the city that has been designated as the Spanish Social Economy Capital for 2023.

Another important milestone will be the EU-Latin America-Caribbean Summit (EU-CELAC), which will take place in Brussels, and the EU-CELAC business and civil society forums, in which the European Social Economy plans to actively participate alongside partners from the other side of the Atlantic.

Alongside the Spanish Government’s efforts to support the transformation and transition of the social economy through the EU’s Next Generation funds, with a call launched last December by the Ministry of Labour and Social Economy with a budget of 99.34 million euros, President Sánchez also announced a new fund of 400 million euros for impact investments, from which social economy enterprises and organisations can be beneficiaries.

During the meeting, Pedro Sánchez expressed the Spanish government’s commitment to Social Europe within the framework of the ecological and digital transition. “The Spanish Presidency of the Council should be an opportunity to accelerate a fair recovery of our economies, ensuring that no one is left behind,” he said.

For its part, Social Economy Europe, through its President, Juan Antonio Pedreño, has expressed its willingness to support the success of the Spanish Presidency of the Council, and has recognised Spain’s key role as a driving force for the development of the social economy in the EU and in the world, where Spain is promoting with a large coalition of countries a UN resolution on social economy.

President Pedreño and Vice-President Jérôme Saddier also expressed the willingness of their national social economy organisations, CEPES and ESS-France, to sign a Memorandum of Understanding aimed at completing and reinforcing the cooperation agreement on the social economy signed last week in Barcelona between the French and Spanish governments.

The cooperation agreement was signed by the Spanish Vice-President for Labour and Social Economy, Yolanda Diaz, and by Catherine Colonna, Minister for Europe and External Relations, on behalf of the Secretary of State for the Social and Solidarity Economy, Marlène Schiappa.

The importance of the coming year for the social economy was also raised by the SEE and CEPES delegations with key projects and challenges such as the Council Recommendation on framework conditions for the social economy; the possible UN resolution on SSE; the launch of the EU Single Gateway on Social Economy, and of the Youth Entrepreneurship Policy Academy; as well as the importance of supporting the Ukrainian social economy movement and its new organisation ‘Social Economy Ukraine’.

Vice-President of Social Economy Europe, Patrizia Bussi, also called on the Spanish Government to actively support and cooperate with EU Member States where the social economy ecosystem is less developed.