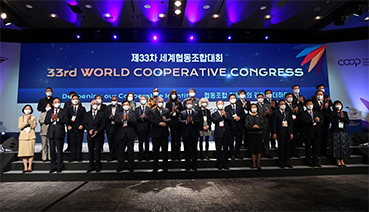 The global co-operative movement was welcomed to the World Co-operative Congress in Seoul by the President of the Republic, Moon Jae-in, who gave a keynote speech at the opening ceremony of the event on 1st December. The International Co-operative Alliance (ICA) organises co-operative congresses every 5-10 years to bring together the co-operative movement from all over the world. The Seoul Congress was attended by more than 1,000 delegates, and hundreds more participated in the congress virtually.

Over three days, participants discussed the role of cooperatives in facing the most pressing global challenges, including the COVID-19 crisis and climate change.

During his speech at the opening of the World Cooperative Congress, ICA President, Ariel Guarco highlighted the role of cooperatives in tackling some of humanity’s greatest challenges.

After observing a minute of silence in the memory of those who lost their lives during the pandemic, he described how cooperatives around the world helped local communities cope with COVID-19 challenges.

“But we also came to at this Congress with great pride! The pride of having demonstrated, once again, the enormous strength of our cooperative business model to face the crises. To give answers to the necessities of our partners and communities at the worst of times”.

“We have proven, once again, the resilience of our model. This is no coincidence. It is the result of the strength of our cooperative identity. We have to be proud of our model and of our identity.”

Mr Guarco said Sustainable Development has been part of our DNA for many decades and was explicitly incorporated into the cooperative principles in 1995. He mentioned the long history of the ICA, which celebrated its 126th anniversary this year, adding that it was “a story dedicated to build and defend our Cooperative Identity.”

He added that the cooperative identity provided cooperatives a competitive edge. He explained that cooperatives were empowering members, investing in education and training, and cooperating with other cooperatives to provide the best services to their members.

“We know that our cooperatives are competitive as a result of the application of the Cooperative Principles, and not despite the cooperative principles,” he said.

“Our competitiveness is built from the Cooperative Identity,” he added.

Congress website with a lot of news about the congress