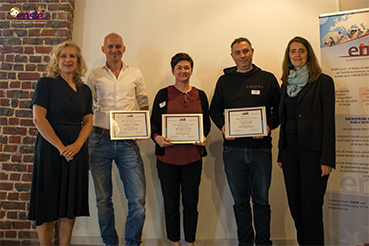 On September 20th and 21st, the European Network of Social Integration Enterprises (ENSIE) celebrated its 20th anniversary during a series of events in Brussels under the colors of its #BuyResponsible campaign! ENSIE was officially established in Bruges (Belgium) on May 11, 2001. For several years, exchanges between national networks for Work Integration Social Enterprises (WISEs) have made possible the identification of common identifying principles for these initiatives through the various countries of Europe. ENSIE takes for its objective the representation, maintenance and development within Europe of networks and federations for work integration social enterprises.

The celebrations started with a cocktail, an opportunity to meet with ENSIE members as well as the closest network’s partners in an informal setting. During the evening, the participants recalled the good moments of the last 20 years and reflected on the work done since the beginning of ENSIE as well as the changes work integration social enterprises (WISEs) faced since 2001.

The second day took place the conference “Supporting more inclusive labour markets? #WISEs #BuyResponsible”. Two sessions followed one another, the first one focused on the role of the State in supporting policies in favour of WISEs, with examples from France and the Czech Republic as well as from the European Commission. The second session put the spotlight on the possibilities for collaboration between “traditional” enterprises and WISEs. The speakers presented good practices from Heineken and ViE – VINCI Insertion Emploi as well as the “Buy Social” campaign from Social Enterprises UK.

This day was also an opportunity to award in person the ENSIE WISE manager award finalists, after the virtual ceremony that took place last November. The three finalists Humana Nova from Croatia, Milieuwerk from the Netherlands and PACE from Ireland – the winner- were able to present their enterprises and their goals during a ceremony animated by Victor Meseguer from Social Economy Europe.

During the afternoon, a session reserved to ENSIE members was organised on socially responsible public procurement. Anna Lupi, Legal and Policy Officer at the European Commission (DG GROW), presented the «Buying Social» guide published by the European Commission last May. Some concrete examples of application of the European Directive were then presented. Two ENSIE French members, the fédération des entreprises d’insertion and COORACE, started by showcasing their advocacy activities, in particular in this area. Guillaume Manier explained afterwards the good practice from the French departement “Pas-de-Calais”. Finally, ENSIE Czech member, TESSEA, underlined the role of local and regional authorities in accompanying WISEs.

Those two days have been organised at CeMOME, a WISE from Brussels, specialised in extra-school activities. The catering was provided by La Tricoterie, a cooperative that aims to be a “Link Factory” in its area. To thank all the speakers and participants, ENSIE asked Il Grappolo, an Italian WISE, to make water bottles with the ENSIE colours to give away.