Spain: Great success for the 3rd University Week of the Social Economy: many participation and activites 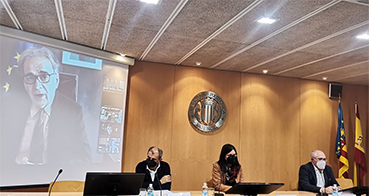 The 3rd University Week of the Social Economy ended on 31 March, after ten days of a great intensity of events, with a total of 134 activities in 36 universities, in which more than 5,000 people participated. Once again, a great success for the ENUIES Network of CIRIEC-Spain, whose objective was to raise awareness of the intense university teaching and research activity on the sector of cooperatives, worker-owned companies, mutual societies, social enterprises and the third sector.

The 3rd #SemanaUniversitariaES concluded with a major event on the European Action Plan for the Social Economy, its development and the vision of the Academy. The event was organised jointly with Polytechnic University of Valencia, CEGEA and the AECA – Spanish Association of Accounting and Business Administration. The event was attended by the Spanish Minister for Universities, Joan Subirats; the President of CEPES and Social Economy Europe, Juan Antonio Pedreño; the General Director for Entrepreneurship and Cooperative Movement of the Generalitat Valenciana, Teresa García; the President of the AECA, Leandro Cañibano; the President of the Confederation of Cooperatives of the Valencian Community, Emili Villaescusa, as well as experts from CIRIEC-Spain, led by its President, Adoración Mozas.

At the inauguration, Minister Subirats sent a video message of congratulations to the organisers of University Week. He encouraged more universities to join in the teaching and research of the Social Economy, for their entrepreneurship services to take more account of the different figures in the sector, and for universities to contract their external services also with cooperatives or other companies in the sector.

The event, led by Professor Juan Juliá Igual, President of the ENUIES Network, presented the challenges and opportunities offered by the European Action Plan for the Social Economy. The first presentation was given by Professor Millán Díaz, who provided a vision from the academy. Díaz expressed the support of the ENUIES Network and CIRIEC-Spain, to the Action Plan for which the involvement of European universities in training, knowledge transfer and entrepreneurship is necessary.

Report on University Education in the social economy in Spain

In this regard, Professor Millán Díaz announced the preparation by ENUIES of a report on University Education in Spain in the Social Economy, which will be presented at the CIRIEC-Spain assembly next June, and which provides very relevant results on the activity of Spanish universities in the field of the social economy. Although there is still a long way to go, a number of universities have long had consolidated programmes of the highest quality, amounting to almost a thousand ECTS credits per year.

President of CEPES, Juan Antonio Pedreño, and Felipe Palau, Professor of Commercial Law at the UPV, explained the importance that the European Action Plan for the Social Economy can have, among other objectives, to ensure that national legislation, especially in socio-economic matters, increasingly takes into account and reflects the differential nature of social economy enterprises.

The president of CIRIEC-Spain, Adoración Mozas, was pleased with the great success of the University Week, and welcomed the high participation of both universities and the social economy sector, in a necessary pairing to achieve the improvement of the sector and society as a whole, with the collaboration of public administrations.