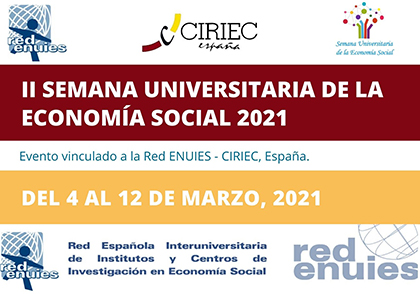 Centres, institutes and other university research structures in the Social Economy in Spain and internationally are holding the 2nd University Week of the Social Economy from 4 to 12 March. A total of 127 activities, in 26 universities, have been schedules for these days, completing a very broad and varied agenda of events, with the aim of raising awareness of the intense university teaching and research activity on the sector of cooperatives, worker-owned companies, mutual societies, social enterprises and the third sector.

The #SemanaUniversitariaES is organised by CIRIEC-Spain through the ENUIES Network of University Research Centres and Institutes in Social Economy. It will consist of conferences, round tables, film forums, presentation of publications and results of research projects, seminars, workshops or specific training, among others.

As explained by the president of the ENUIES Network, Professor Juan Juliá, and the president of CIRIEC-Spain, Professor Adoración Mozas, in short, “the ultimate goal is to show university students the possibilities of employment and self-employment that the Social Economy represents, while generating a meeting-place between the ‘Academy’ and the ‘Social Economy Sector’ to promote the transfer of knowledge and generate sectoral and social innovation in the Social Economy”.

“We are aware, on the one hand, that CIRIEC’s vocation is to promote a real interaction with socio-economic agents and, on the other hand, that the sector demands the application of university knowledge to increase its competitiveness”, they continue.

As a new feature of the 2nd edition, University Week 2021 will conclude on Friday 12 March with a major event on the role of co-operatives and other social economy enterprises in the Recovery, Transformation and Resilience Plan for the Spanish economy. This event will be organised jointly with the AECA – Spanish Association of Accounting and Business Administration, and will be attended by the President of CEPES and Social Economy Europe, Juan Antonio Pedreño, and the Director General of Self-Employment, Social Economy and CSR of the Spanish Government, Maravillas Espín, together with experts from the AECA and CIRIEC-Spain.