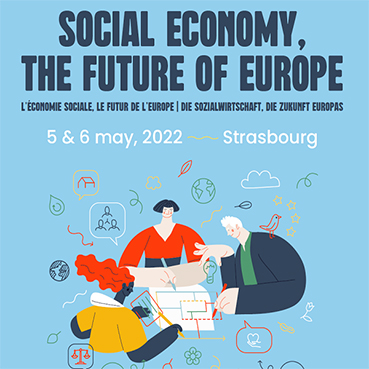 On 5 and 6 May 2022, the Palais de la Musique et des Congrès in Strasbourg will host the Conference ‘The Social Economy, the Future of Europe’, the first major EU face-to-face event since the beginning of the pandemic and since the adoption, in December 2021, of the European Social Economy Action Plan. The event is expected to mobilise more than 1,000 people, including social economy actors, experts and representatives of European institutions and governments, to exchange, build partnerships and commit to the implementation of the Action Plan.

The event is organised by the City of Strasbourg, in partnership with the French Presidency of the Council of the EU, the European Commission, the EESC and the Committee of the Regions. Social Economy Europe and social economy networks such as SSE International Forum and CIRIEC are collaborating.

Social Economy Europe and its network will participate in the event with its President, Juan Antonio Pedreño, who will speak at the plenary session on the implementation of the European Social Economy Action Plan (5 May at 10:45 a.m.) together with Commissioner Nicolas Schmit and social economy leaders Deirdre Garvey (The Wheel), Angela Achitei (ADV Foundation) and Diana Ghinea (Coompanion).

The event will also include a series of complementary workshops. In chronological order:

5 May from 15:30 to 17:30 CEST
Solidarity now! A social economy response to the crisis, solutions for the integration of refugees. A vision for rebuilding Ukraine
With Social Economy Europe, the Ukrainian Social Academy, the Lithuanian Social Business Association (LISVA), the Social Economy Support Centres Network of Western Pomerania (SZOWES), the Centre of Social Economy of the Wielkopolska Region (WOES) and the American Sustainable Business Network (ASBN).

5 May from 18:00 to 19:30 CEST
Growth of the social economy worldwide
With Social Economy Europe, SSE International Forum, GSEF and DIESIS Network.

6 May from 9.15-10.45 CEST
Development of statistics and research on social economy to boost the visibility and understanding of the social economy
With ESS-France, CASES, CIRIEC, EMES Network, Euclid Network and RIUESS

6 May from 11 a.m. to 12:30 p.m. CEST
Transition paths of the social and community economy
With the European Commission (DG GROW), together with Diesis Network, Social Economy Europe, Euclid Network and Euricse.

Social Economy Europe will also hold its annual General Assembly on 4 May in Strasbourg, in the framework of this important EU Social Economy Summit.