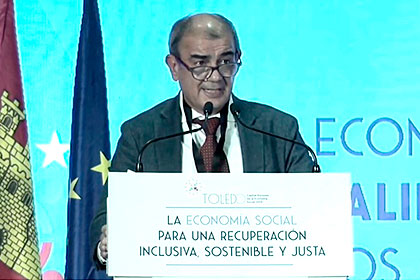 At the Meeting, social economy actors were also recognised and supported by international bodies such as the ILO and the OECD.

The President of Social Economy Europe (SEE), Juan Antonio Pedreño, took part in the High Level Meeting on the Social Economy in the EU ‘The Social Economy for an inclusive, sustainable and fair recovery’ on 4th December in Toledo. The event marked the end of the Spanish Presidency of the Follow-up Committee of the Luxembourg Declaration, which will be held by Portugal next year.

Pedreño stressed that the Toledo meeting “has been the event in which the role of the Social Economy in the recovery has been most clearly and unanimously supported”.

“It is an unprecedented event that 18 European governments, 70% of the EU, have signed the Toledo Declaration”, said the President of SEE, who in his speech advocated the urgent need to approve the European Social Economy Action Plan as a key instrument to provide visibility and impetus to generate “a real ecosystem towards this business model”.

Support from the ILO and the OECD

Guy Ryder expressed his concern about the economic effects of the pandemic, “which have brought the world of work to its knees, deepening inequalities”, leaving behind “increasingly worrying” data, especially on groups of women, young people, migrant workers and the irregular economy.

“The Social Economy”, – pointed out Ryder – “will help to create not a new normality but a better, fairer and more sustainable normality. The sector has also suffered from the effects of the pandemic, but has shown itself to be stronger and more resilient”.

The Social Economy as general rule

For his part, Secretary General of the OECD, Ángel Gurría, stressed the organisation’s commitment to social economy entities, in which he “firmly believes” and advanced a collaboration that will allow the promotion of solidarity-based economic systems at a global level.

According to Mr. Gurría, this collaboration “aims to make the Social Economy the general norm rather than the exception, the rule by which we are governed when doing business”, and he added: “We want to encourage companies so that social and environmental performance is at the same level as economic performance”.

Ángel Gurría called for a change of model “in which the word shareholder is no longer the key word, but rather an agent or stakeholder”, he stressed. At the international organisation, explained, “we are ready to help all countries to promote the social economy as an agent of change for a fair, inclusive and ecological recovery”.