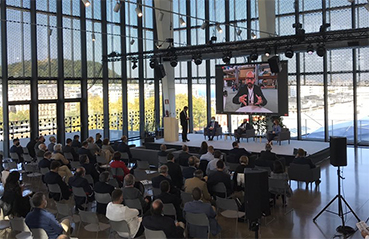 The Social Economy Intergroup of the European Parliament held an exceptional meeting in San Sebastian on 7 October to discuss, among other issues, the European Social Economy Action Plan, the progress made and the future of European policies to promote this business model.

Under the slogan ‘Social Economy as an Industrial Ecosystem. A catalyst to Build Back Better & Fairer’, the Intergroup met for the first time in its history outside the European Parliament, in a hybrid event attended by 300 people. The meeting was held in the context of the Denon Artean award ceremony, organised by the Higher Council of Cooperatives of the Basque Country and KONFEKOOP, which brought together an intense agenda of social economy work at international, national and regional level from 5 to 7 October.

During the meeting it was announced that the long-awaited European Action Plan for the Social Economy will be approved on 8 December in Brussels.

The inauguration of the day was attended by the European Commissioner for the Internal Market, Thierry Breton, who stressed that the Action Plan is the transition towards a social economy ecosystem and stated that “we have worked hand in hand with the European Commissioner for Employment and Social Rights, Nicolas Schmit, to make it a success”. He also pointed out the importance of public-private collaboration, of moving towards social innovation, as well as access to funding to promote this business model.

For his part, Jordi Cañas, MEP and First Vice-President of the Social Economy Intergroup, stressed that the European Social Economy Action Plan “means that the European institutions are definitively defining the social economy as a fundamental element in all the EU’s strategies and objectives”. M. Cañas wanted to emphasise the importance of “starting with the foundations, including having a common operational concept of the social economy, as well as improving access to markets and financing”.

The president of CEPES and Social Economy Europe, Juan Antonio Pedreño, stressed that the Plan, for which the sector has been working since 2014, will help governments to promote the right conditions throughout Europe “to generate more jobs and contribute to a fairer society”.

He also pointed out the need for policies to be accompanied by funding and, among other examples, mentioned some of the sources that this business model has relied on up to now, such as the ESF+ or the Next Generation funds.

The Social Economy in the recovery

“We have collected innovative good practices and we have looked towards the European Action Plan to align ourselves as effectively as possible and take the social economy to where it needs to be, which is to be the locomotive that drives economic recovery,” she said.

The European Commissioner for Employment and Social Rights, Nicolas Schmit, gave some hints about the content of the Plan before its official presentation, which will take place on 8 December. According to him, “the plan aims to build and specify specific actions to promote the ecosystems of the social economy and will do so by building a political and legal framework for the social economy that must be adapted at all levels”.

The plan, as he stressed, has the ambition to inspire and promote the visibility of this model by all actors, including public administrations.