Presentation of the Edgard Milhaud Award 2022 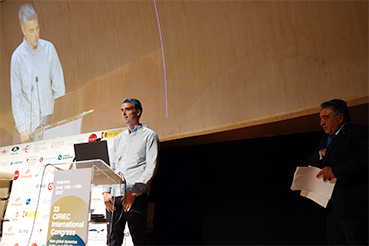 The Closing Day of the 33rd CIRIEC International Congress was marked by the awarding of the Edgard Milhaud Prize, as well as the recognition of the best papers presented at the Congress. The Edgard Milhaud Award was created in 2008 to commemorate the founder of CIRIEC International, which this year celebrates its 75th anniversary. The Prize aims to encourage and recognise the work of a young researcher or expert working on CIRIEC-International’s own themes, i.e. cooperative movement, the social economy, the public economy and public services, and activities oriented towards the service of the general and collective interest.

Two prizes were awarded this year. The first was attributed to the French researcher Pierre Wokuri, from the University of Rennes 1, for his thesis entitled “Orient and activate: the cooperative renewable energy projects at the test of the market. Denmark, France and the United Kingdom in a multi-level comparative perspective.”

The second prize was awarded to Juan Francisco Albert Moreno, from the University of València, for his thesis with international mention entitled ‘Monetary Policy and Inequality from an inclusive and Social Banking perspective’.

The awards ceremony was held as part of the celebration of CIRIEC International’s 75th anniversary, an event presented by the new president of CIRIEC, Bernard Thiry. On the occasion, CIRIEC published two books: ‘CIRIEC 1947-2022: 75 years of reflection and action in favour of the general interest and economic democracy’, and ‘The economy of collective interest: 75 years of scientific research’.