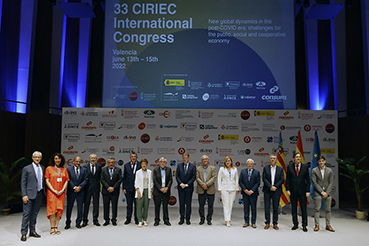 Valencia was on 13, 14 and 15 June 2022 the world capital of the Public, Cooperative and Social Economy, with the celebration of the 33rd CIRIEC International Congress. The Congress was held under the theme “New global dynamics in the post-Covid era: challenges for the public, social and cooperative economy”. It was a very special and intense event. And a great success, backed by multiple milestones: the participation of a total of 1,217 congress participants and guests from 33 countries; 300 communication proposals received, of which 184 were accepted and 132 were presented in 19 sessions. And two keynote speakers of the highest level, such as the Nobel Prize winner Paul Krugman, and the economist Mariana Mazzucato, both highlighting the essential role that co-operativism and the social economy have and will have in our societies.

Paul Krugman gave the inaugural lecture, entitled ‘Co-operating for a better future’. He analysed the influence of the social economy on two aspects: economic inequalities and climate change. With regard to inequalities, he stated that “it distorts society and reduces the capacity for collective action”. In this sense, the social economy helps to prevent people from being left behind, with examples he mentioned such as housing cooperatives, third sector associations and trade unions, whose action is also fundamental for a fairer distribution of wealth.

With regard to climate change, Krugman stated that “if you are not aware of what climate change means, you are not in the world. We are facing an extraordinary water crisis, we cannot escape CO2 emissions”. It is a problem “of very large dimensions and it has to be tackled at international level”. For this reason, “ultimately it is going to be the administrations that have to take the key measures, but the social economy and cooperatives must be part of the puzzle that solves the problem”, he said.

For Krugman, “there are too many crises, inflation, the war in Ukraine, the food crisis, the energy crisis… but these crises will pass”. And he concluded: “Europe will probably be able to control them. But in the most serious crises – extreme inequalities and environmental damage – it will be third sector organisations that can make a difference”.

How economics should be done?

In her speech, Mazzucato explained that, given the current crises we are experiencing, “we cannot look for patches to solve them, we have to make very bold investments in certain parts of the economic sector to tackle the problem at its root”.

In this respect, the economist stressed that “there is no better model than co-operativism for tackling the necessary changes in the way the economy is run, it is not perfect, but it is a great example”.

Alain Arnaud, President of CIRIEC International, spoke along the same lines as Mazzucato, pointing out that “in the face of the transformation of society and the economic model, the agents of the social economy must mobilise to ensure that the changes we are undergoing do not end up becoming catastrophes for society. Moreover, public policies must accompany this transformation by placing people at the centre”. At the Congress, Alain Arnaud handed over his presidency of CIRIEC-International to Bernard Thiry, who has been CIRIEC’s Executive Director for more than 20 years.