Porto Social Summit & Conference on the Future of Europe in Strasbourg 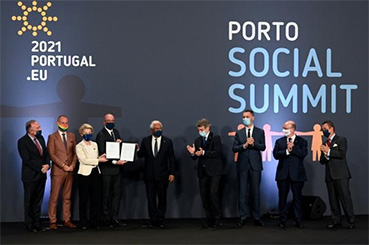 Two major events that can influence the future of the European Union for the next decades were held in Porto and Strasbourg: the Porto Social Summit and the Conference on the Future of Europe’s inaugural event in Strasbourg.

The Social Summit was of utmost importance to consolidate the targets included in the European Pillar of Social Rights Action Plan.

On Saturday, May 8, the Heads of State and Government adopted the Porto Declaration, stressing the importance of closely following and monitoring the implementation of the headline targets of the European Pillar of Social Rights for 2030, and the key role of social enterprises to create quality jobs and improve the quality of the existing ones.

Social Economy Europe President, Juan Antonio Pedreño, commented on the Porto Social Summit results: “We welcome the collective agreement on our responsibility to generate a recovery that leaves no one behind, that reduces poverty and inequality and ensures that the green and digital transitions are just and at the service of people”.

“We also welcome the recognition of social enterprises and the whole social economy community as a concrete tool to create quality jobs for all, to generate an entrepreneurial revolution across Europe, also mobilising young entrepreneurs, to save jobs and companies through workers buy outs, and to make the promise of economic democracy and an economy that works for people into a reality”.

Regarding the Conference on the Future of Europe, Social Economy Europe calls to all social economy actors, from all over the EU to participate and have their say from now onwards: www.futureu.europa.eu/.

According to SEE director, Víctor Meseguer, something concrete that could be changed is article 54 of the Treaty of Functioning of the EU that excludes non-profit organisations from the definition of companies or enterprises:

“We need to adapt EU Law to today’s reality. The social economy, including enterprises and organisations which reinvest most profits or which are not-for-profit, is a major part of Europe’s social market economy. Citizens know that their mutual healthcare, their social coop or the Oxfam shop around the corner, just to name a few social economy examples currently not well recognised, is an enterprise”.

“Furthermore, according to the latest EU data, the social economy represents 2.8 million enterprises in the EU that employ 13.6 million employees. The social economy is a growing reality that should be integrated as a social partner in the EU cross-sectoral social dialogue”, Victor Meseguer.