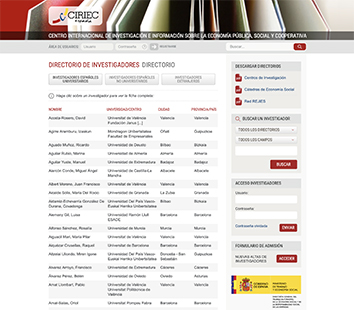 This Directory reveals a powerful and consolidated scientific community, made up of women and men whose object of study is Cooperativism and Social Economy. They publish in the most prestigious international journals, carry out continuous knowledge transfer to the sector and public administrations, and develop cutting-edge research projects at national and international level.

The purpose of CIRIEC-Spain has been to update a Directory occasionally in order to make research more visible, to encourage contact between researchers and to promote the formation of working teams in the different fields of the Social Economy. The first CIRIEC-Spain Directory dates back to 1994.

The current Directory is the first to be published online. It takes advantage of information and communication technologies, which also allow the document to be alive and open. The Directory is an independent platform, connected to the CIRIEC-Spain website, which allows it to be permanently updated by the researchers themselves. They can access and modify their file by means of a personal password.

Researchers who are not yet in the Directory have the opportunity to join it by sending their application for admission in this short form. The minimum requirements to join the Directory of Researchers of CIRIEC-Spain are to be a PhD student, or to have published an article in a peer-reviewed journal, or to have participated in the elaboration of a scientific report or study. Once the application has been accepted, the researcher will be offered the corresponding password to enter the system and fill in their file.

There are 3 databases that the reader can find in this directory, together with 3 PDF documents. The first database corresponds to the Spanish university researchers, 390 distributed throughout the 17 autonomous communities and 57 universities.

The second list corresponds to researchers who are present in Spanish non-university institutions, mainly in federations and confederations of the Social Economy. There are 31 people working in eight of the autonomous communities.

The third database corresponds to non-Spanish researchers, who are mainly Ibero-American researchers. There are 160, of which 131 belong to the following countries: Argentina, Brazil, Chile, Colombia, Costa Rica, Dominican Republic, Ecuador, Mexico, Paraguay, Peru, Portugal, Uruguay and Venezuela. In this way, the Directory, which in previous editions focused only on Spain, has become international.

Finally, the Directory offers 3 PDF documents, which present the research centres and chairs gathered in the ENUIES Network, as well as the REJIES Network of Young Researchers in Social Economy of CIRIEC-Spain.

For the president of CIRIEC-Spain, Adoración Mozas, the Directory “is a new instrument that makes it possible to build bridges of collaboration, now with the whole world; a document that has been designed to be updatedat all times and open to any researcher who wants to appear. It is undoubtedly a reference for researchers in Social Economy at international level, which is growing day by day and helping to give the Social Economy the importance and visibility it deserves”.