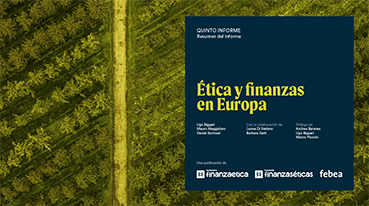 The fifth edition of the report ‘Ethics and Finance in Europe’ has been launched. The report has been produced by the cultural foundations of the Banca Etica Group (Fiare), and this year for the first time with the collaboration and support of FEBEA (European Federation of Ethical and Alternative Banks and Financiers). The presentation took place at the European Parliament in Brussels and was broadcast via streaming.

The new report shows, for the fifth consecutive year, the social, economic and environmental performance of banks that are guided exclusively by the application of ethical principles. Its results are based on reports to 7 FEBEA members, the European members of the GABV – Global Alliance for Banking on Values – and 2 banks also in Europe that are part of INAISE – International Association of Investors in Social Economy.

According to the results, even in 2020, the first year of the pandemic, ethical banks and banks with values have proven to be much more focused on providing services to the real economy than traditional banks, as well as being more profitable on average.

The volume of bank deposits increased, in a trend that seems to have benefited ethical banks much more than the European banking system as a whole.

In this fifth edition, the report also shows how ethically-driven banks are among the first in the world to account for indirect greenhouse gas emissions.

A few years ago, the world of ethical finance warmly welcomed the launch of the EU’s sustainable finance initiative. The new FEBEA report publishes a position paper outlining a number of points for improvement and revision in order to truly achieve sustainable finance.

The presentation of the report was attended by Peru Sasia, current President of FEBEA; Anna Fasano, President of Banca Etica; Federica Ielasi, representative of the Board of Directors of Etica Sgr; and representatives of FEBEA, Social Economy Europe and GABV.

Fifth report on ethical and sustainable finance in Europe