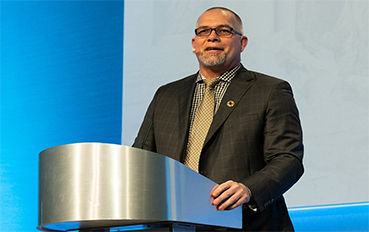 More than 400 leaders from the global mutual and cooperative insurance sector gathered on 25-28 October for the ICMIF Centenary Conference, the International Cooperative Alliance’s sectoral branch for cooperative insurance. The Conference took place in Rome, the city where ICMIF was founded 100 years ago. The theme of the event was ‘Leading with Purpose’ and it was hosted by one of ICMIF’s founding members, the Unipol Group.

During the Conference, ICMIF launched the Insurance SDG Calculator, the first tool to measure the sustainability impact of insurance against the Insurance Sustainable Development Goals (iSDGs). Swiss Re Institute developed the tool under the iSDG initiative of the United Nations Principles for Sustainable Insurance (UN PSI).

The tool measures the sustainability impact of iSDG within each company’s insurance portfolios and business operations. It allows ICMIF mutuals and cooperatives to assess their own impact on iSDG against a set of ICMIF-calibrated indicators that reflect mutual values and strategic focus areas, such as risk prevention and inclusive insurance.

ICMIF also launched the Resilience Benchmark during the Congress, which builds on the organisation’s work with the United Nations Office for Disaster Risk Reduction (UNDRR) to mainstream disaster risk reduction in mutual and cooperative insurers.

Also announced at the Congress was ICMIF’s new president, Rob Wesseling (Canada), president and CEO of Co-operators. Speaking about his new role, Wesseling said: “I am delighted to take on this role at an important time for our industry. Through our work at ICMIF we have demonstrated that the cooperative and mutual insurance sector is fundamental to building a better future. Together we are actively working towards a resilient, sustainable and equitable future and I believe that by moving towards ambitious goals in areas such as risk reduction, sustainable development and responsible investment, we will have a catalytic impact on the global insurance industry and, eventually, the economy as a whole”.

Rob Wesseling takes up his new role at ICMIF at a time of considerable opportunity and challenge for the global mutual and cooperative insurance market. ICMIF’s latest research forecasts that the sector will recover strongly from a 2020 that marked only the second year of negative growth for the mutual market (-0.4%) since the 2007 financial crisis, and forecasts for 2021 figures point to the strongest growth the sector has experienced in ten years.

More than 70% of ICMIF members outperformed the annual growth of their local market last year. ICMIF members currently account for USD 250 billion in premium income and more than USD 2 trillion in assets held. A total of 197 organisations in 60 countries are ICMIF members, employing more than 226,000 people and serving more than 350 million members/policyholders