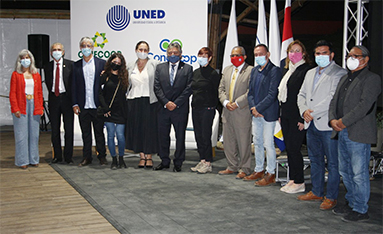 CIRIEC held the 8th CIRIEC International research conference on social economy in Costa Rica from 8 to 10 September, with a very intense agenda of paper presentations and conferences. A total of 525 people participated in the Conference, in which 180 scientific papers were presented, either in person or online, on the most varied topics of cooperative movement and the social economy, and in particular on the responses being offered by the social economy to the current pandemic situation. The Conference was organised by the recently constituted Costa Rican section of CIRIEC, chaired by the Universidad Estatal a Distancia (UNED) of Costa Rica, in collaboration with CIRIEC International.

The constraints of the pandemic meant that the Conferencehad to be held outdoors for the first time, in the case of CIRIEC. That is why it was held in the facilities of the Oikoumene Cooperative Training Camp, located in the Central Valley of Costa Rica, between the municipalities of San José and Cartago. This camp is managed by a worker cooperative, promoted by CENECOOP, R.L.

In addition to the most conference’s relevant experts, representatives from the sector and the public administration participated in the different sessions. The Conference was inaugurated by the Vice-President of the Republic of Costa Rica, Marvin Rodríguez Cordero, and the Costa Rican Minister of Economy, Victoria Hernández, also participated.

Participants included Henry Mintzberg, expert in Management, Strategy and organisational forms, Christian Felber, promoter of the Economy of the Common Good, Bernardo Kliksberg, promoter of Corporate Social Responsibility, and Ariel Guarco, President of the International Co-operative Alliance (ICA). They all highlighted the major challenges facing humanity today, from climate change to growing inequalities, political tensions and public health. Nevertheless, the social and solidarity economy was recognised and appreciated as a global response, diverse but united in shared universal values, from which it offers solutions to people’s needs, in the field of sustainability and well-being.

On the closing day, the first book published by CIRIEC-Costa Rica was distributed to the conference participants. The first copy was solemnly handed over by Federico Li Bonilla, Executive Director of CIRIEC-Costa Rica, to Rodrigo Arias, Rector of the UNED and President of CIRIEC-Costa Rica. The book is a compilation of part of the papers presented at the Conference, under the title ‘Social Solidarity Economy and COVID-19. Proposals for a global solution’.

During the event, the OIBESCOOP and CIRIEC-International book on ‘Emerging Experiences of the Social Economy in Ibero-America‘ was also presented by its directors, Professors Carmen Marcuello, President of the Ibero-American Observatory of Employment and the Social Economy (OIBESCOOP), and Juan Fernando Álvarez (President of the Scientific Committee of CIRIEC-Colombia).

Save the date: Upcoming CIRIEC Events

One year earlier, from 13 to 15 June 2022, the 33rd CIRIEC International Congress on Public, Social and Cooperative Economy will be held in Valencia. It has also been announced that it will have a scientific part, in addition to the institutional part typical of CIRIEC’s historical tradition of congresses, such as the one held in 1992 also in Valencia, and the one in Seville in 2008. CIRIEC-Spain will soon be providing full information on the 2022 Congress in Valencia, including the main speakers, programme and registration.