CIRIEC, a hub for social economy and its values 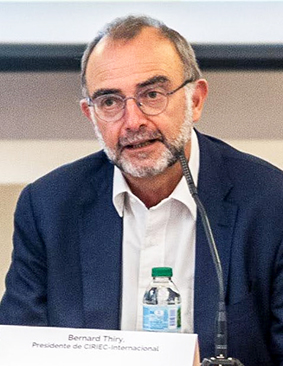 On the occasion of its 33rd congress last June, CIRIEC celebrated its 75th anniversary, notably by publishing two books which retrace the scientific contributions and the main developments of the organisation. Since its creation, CIRIEC has devoted itself to the study and objective information on the various forms of enterprises and organisations that contribute to the collective interest: local public enterprises, state-owned enterprises, cooperatives, mutual societies and other components of the social economy. Since 1974, the term “Social Economy” was included in CIRIEC’s statutory name.

Throughout its history, CIRIEC has fully participated in the development of the social economy sector. Since the 1980s, it has brought together many researchers interested in the resurgence of the concept of social economy, multiplying conferences and publications to ensure the conceptual foundations of this sector between the public and private sectors. It has increased its collaboration with the services of the European Commission, in particular the “social economy” unit of the Directorate General for Enterprise, in order to gain a better understanding of this sector and its components, and to further federate its strengths and potentialities. It also became a partner in the first European conferences on the social economy in the 1990s, with CIRIEC chairing and acting as secretariat for the Consultative Committee for Cooperatives, Mutual Societies, Associations and Foundations of the European Union, the distant forerunner of the current Social Economy Europe. Work is also carried out with and for the European Parliament and the European Economic and Social Committee.

Over the last few decades, CIRIEC has strived to analyse the social economy and its contributions without systematically opposing the social economy to the public economy, which often shares the same objectives. It has also endeavoured to measure the economic importance of the social economy and in particular of its market and entrepreneurship component which is mainly the cooperatives. I am thinking of the study on the satellite accounts of social economy enterprises within the national accounts and the work on the statistical classification of cooperatives and their measurement in terms of jobs and work as well as their added value. Every two years CIRIEC offers a broad global exchange forum for social economy researchers in the form of social economy research conferences; last year in San José, Costa Rica, next year in Seoul. All its activities are carried out within the framework of an exchange and dialogue between practitioners and researchers, since one of CIRIEC’s specific features is that it brings together enterprises, organisations and managers on the one hand, and research centres, professors and researchers on the other.

Obviously, the organisation that I knew as a young director in 1990 is no longer the organisation that I have the honour of chairing today. The majority of its members (national sections and affiliated members) are non-European and we are increasingly working with other global organisations. It should also be recognised that the challenges we face are also global challenges and the United Nations Sustainable Development Goals now guide our work. CIRIEC has strengthened its collaboration with the International Labour Organisation in recent years, producing a publication to commemorate the centenary of the creation of the ILO’s cooperative unit, collaborating with the Committee for the Promotion and Advancement of Cooperatives (COPAC), and accompanying and welcoming the landmark Resolution on Decent Work and the Social Solidarity Economy adopted last June by the International Labour Conference. This resolution provides a clear and comprehensive tripartite definition of the social economy, based on a set of values and principles.

As an observer member of the United Nations Inter-Agency Task Force on the Social and Solidarity Economy (UN-TFSSE), CIRIEC aims to increase the visibility of the social economy, to gain greater recognition of its contribution to the economic, social and environmental dimensions of development and to help implement measures for its development.

Thus, with renewed objectives, new partnerships, national sections and affiliated members in the four corners of the world, CIRIEC wants to be today and tomorrow, as in the past, a vibrant organisation at the service of mankind, his dignity, his well-being and democracy, the founding values of the social economy.