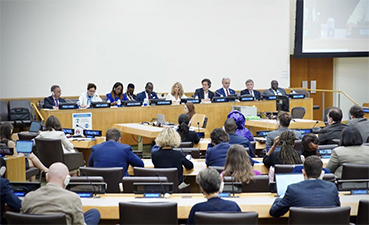 On 22 July, the United Nations hosted a side event at its headquarters in New York to discuss the role of the social economy in achieving the Sustainable Development Goals (SDGs). The various Member States represented at the meeting expressed their support for this resolution within the framework of the United Nations.

Yolanda Díaz, Second Vice-President of the Government of Spain and Minister of Labour and Social Economy, shared the experience of her country, the first in Europe to adopt Social Economy legislation that recognizes the values and principles of the SSE and its transformative potential.

“We want to commit to the internationalization of the Social Economy as a driver of a more human, fair and sustainable economic model to consolidate social alliances around the world and make the transformations to come a reality”, she said.

During the event, various government representatives from around the world took the floor to support of the initiative led by Spain to promote this Resolution in the United Nations General Assembly. Ministerial representatives from France, the Dominican Republic, Senegal and Slovenia spoke in this regard, and were joined by the governments of Argentina, Chile, Costa Rica, Italy, Portugal, Morocco, Malaysia and Bulgaria.

The initiative was also supported by the President of UNECOSOC (United Nations Economic and Social Council) Collen Vixen Kelapile; the Head of Economic Affairs of UNCTAD, Raymond Landveld; the Policy Coordinator of the International Cooperative Alliance (ICA) and member of the International Coalition of the SSE (ICSSE), Joseph Njuguna, and the Director General of the ILO, Guy Ryder, among other personalities.

The President of Social Economy Europe, Juan Antonio Pedreño, pointed out that the social economy “is experiencing a unique moment at international level”. Together with the institutions of the European Union, which already have an Action Plan to promote this business model, and the Recommendations adopted by the ILO and OECD last June, for Pedreño, the boost at global level “will be definitive with the resolution on Social Economy that the United Nations will adopt thanks to the impetus of Spain along with other governments in Asia, Africa, Latin America and Europe, as well as the ILO and other UN agencies”. “This recommendation will be an impressive public policy that will allow the Social Economy to change scale,” he concludes.

A group of States is drafting the resolution, which will be presented to the 77th UN General Assembly, starting on 13 September.

The full recording of the session is available here in different languages.