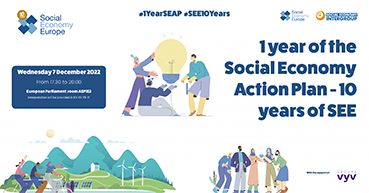 On Wednesday 7 December 2022, in the European Parliament in Brussels, Social Economy Europe (SEE) will launch an event to celebrate One year of the Social Economy Action Plan, and ten years of SEE: for an economy that works for people & the planet.

The conference aims to bring together main social economy policy makers, as well as entrepreneurs and other stakeholders to commemorate these milestones with SEE, as the highest representative organisation of the Social Economy in Europe and as a catalyser of social economy innovation and growth across the EU.

The event’s main goal is to co-design and co-implement a desirable future for the social economy in Europe by tapping into the potential and opportunities of the social economy through national and EU public policies and support mechanisms, promoting the development of a European economy that will create quality jobs and sustainable development, attracting talent, driving innovation, cohesion, and fair transitions.

Registration: registering here to attend in person or online

Interpretation will be provided in English, Spanish, French and Italian