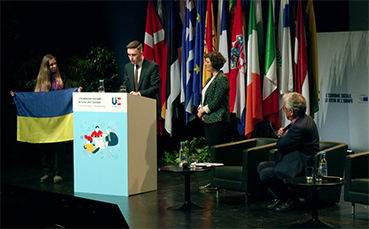 On the 5th and 6th May 2022, the city of Strasbourg hosted the European Conference “The Social Economy, the Future of Europe”, held at the Palais de la Musique et des Congrès. The event gathered over 2,000 registered participants from all over Europe and other regions of the world, and was organised in the framework of the French Presidency of the Council of the EU, with a key involvement of the city and euro-metropolis of Strasbourg, the French Government, Grand Est Region, Alsace, the European Commission, the European Economic and Social Committee (EESC), and the Committee of the Regions. Social Economy Europe (SEE) along members and partners also actively contributed to the organisation of this high-level EU Social Economy Summit.

To open the event, the Mayor of Strasbourg, Jeanne Barseghian, invited guests of honour Petro Darmoris, Board member of the Ukrainian Social Academy, and Alina Bocharnikova, Social Entrepreneurship Program Coordinator at the Future Development Agency of Ukraine to join the main stage, two of the social economy entities that form the dynamic social economy ecosystem of the country. While Bocharnikova held a flag of Ukraine, Darmoris addressed the audience and announced that the Ukrainian Social Academy just joined the European Social Economy family by becoming a member of Social Economy Europe.

He recalled that Ukraine has a long history of social economy entrepreneurship, with over 15,000 co-operatives operating in the country at the beginning of the XX Century in areas including forestry, agriculture and banking, all working “for the social purposes of preserving and developing culture, schooling [and] inclusion”. A local development model, driven by citizens that was ‘erased’ because of the soviet invasion in 1919. After its independence in 1991, and the Maidan revolution of 2014, the country experienced a renewed dynamism of social economy initiatives. Darmoris stressed the need to further integrate Ukraine into the European Union, as well as to mobilise the full potential of the social economy to re-build the country.

The opening also gathered other key stakeholders and policy makers as Valdis Dombrovskis, EC Executive Vice-President for an economy that works for people (read his full speech here), Othmar Karas, Vice-President of the European Parliament, Christa Schweng, President of the EESC, Apostolos Tzitzikostas, President of the Committee of the Regions, Yolanda Díaz, Vice-President of the Spanish Government and Minister of Labour and Social Economy, and Olivia Grégoire, State Secretary in charge of Social and Solidarity Economy of France, among other representatives of the euro metropolis, the region, and Alsace.

In her speech, Spanish Vice-President Yolanda Díaz announced that the social economy will be among the main priorities of the Spanish Presidency of the Council in the second half of 2023, and that Spain has launched a major investment plan into the social economy, mobilising Next Generation EU Funds.

“The Social Economy Action Plan was born in December and the baby now has a big family around him”, this is the metaphor that Commissioner Nicolas Schmit used in his opening remarks to underline that the Action Plan is not merely a possession of the Commission anymore, but it is owned by all Europeans, EU Institutions, MS and other local and regional public authorities, and social economy stakeholders that now have the joint mission to make it a European success through its implementation.

SEE President Juan Antonio Pedreño stressed that the objective of Social Economy Europe’s network is to use this opportunity window to support the scaling up of all social economy actors across Europe in the next 8 years.

Pedreño explained that to do so, actions such as the Council Recommendation on developing social economy framework conditions to be adopted in 2023, the EU Single Social Economy Gateway, or the support of EU and national social economy networks are of outmost importance.