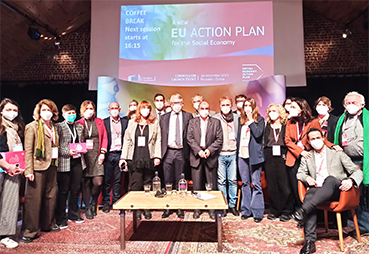 The Plan includes 38 concrete actions to be implemented over the next nine years, in key areas such as state aid, legal and policy frameworks, responsible public procurement and market access, social economy entrepreneurship, access to finance and European funds.

Based on the 2011 Social Business Initiative, the Social Economy Action Plan is the result of a broad consultation process with citizens, the sector and experts, which has lasted seven years.

The Commission recalls that there are 2.8 million social economy organisations and enterprises operating in Europe, generating employment for 13.6 million people and offering solutions to the main challenges facing our societies. They cover a wide range of sectors, sizes and forms, from cooperatives to new social enterprises. “Greater support for the social economy not only creates jobs, but also enables organisations to increase their social impact across the EU,” the Commission says. The Social Economy Action Plan that has been presented paves the way for social economy organisations to thrive and grow.

The Action Plan proposes action in three areas, the first of which is to create the right conditions for the social economy to flourish. To this end, policy and legal frameworks are key. This includes taxation, public procurement and state aid, which must be adapted to the needs of the social economy.

To address these issues, the Commission will propose a Council Recommendation on the development of social economy ecosystems by 2023. It will also issue guidance to Member States on fiscal frameworks and provide guidance on state aid. The Action Plan also aims to improve good practice in socially responsible public procurement, and to promote the orientation of the social economy beyond EU borders.

Social economy organisations should benefit from business development support to start up and develop, as well as to renew and upgrade the skills of their workers. For the period 2021-2027, the Commission intends to increase its support over and above the €2.5 billion previously allocated to the social economy (between 2014 and 2020).

Among other actions, the Commission will launch a new EU Social Economy Portal in 2023, to ensure that social economy actors can find all the information they need in one place on EU funding, policies, training and initiatives. It will also launch new financial products in 2022 under the InvestEU programme, and create a European Competence Centre for Social Innovation.

Ensuring recognition of the social economy and its potential

With the Action Plan, the Commission also launches a “transition roadmap” to support the green and digital transitions of the social economy, in dialogue with public authorities. The European Commission has initiated a public consultation on this topic, which will be open until 28 February 2022.

European Commission Executive Vice-President Valdis Dombrovskis said that the Social Economy Action Plan “bridges the gap between our social economy and the support it needs to thrive and contribute even more to our societies. From cutting the red tape faced by some social entrepreneurs to creating jobs and providing new opportunities for people to upgrade and train, it is vital to deliver just green and digital transitions, as well as an inclusive recovery from the pandemic”.

For his part, Employment and Social Rights Commissioner Nicolas Schmit says that thanks to its strong local roots, “the social economy can offer innovative bottom-up solutions to many of today’s global challenges, such as climate change, digitalisation and social exclusion. The social economy works with and for local communities and has a huge potential for job creation. With this Action Plan I believe that social economy organisations will be able to scale up, be recognised and have an even greater impact on society”.