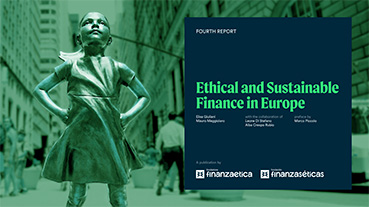 The new report on ethical and sustainable finance in Europe, jointly prepared by the two Foundations of the Banca Etica Group, has been published. The report, the fourth presented since 2018, analyses the evolution of ethical finance in European territory and presents different experiences showing the plurality within the sector.

As in previous years, the document compares the structure, growth and performance of European ethical banks with those of the approximately 4,500 banks operating in the eurozone as a whole, based on data from the European Central Bank. For the first time, the report also makes such a comparison with credit unions.

The report also delves into the SFDR, the ‘Sustainable Finance Disclosure Regulation’ (EU 2019/2088) and presents research from the University of Pisa on ‘Banking and Human Rights’.

According to its main results, over the last ten years (2009-2019), ethical and sustainable banks have performed twice as well as the European banking system, with an average annual return of 5.31% versus 2.37% (in terms of ROE).

Comparison with credit unions has shown that ethical banks are close relatives of credit unions, also in terms of asset structure.