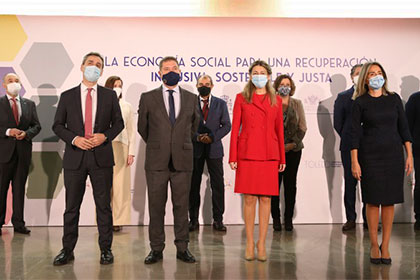 The meeting brought together Governments of the European Union, Senior Officials from the European Commission and international organizations such as the Commissioner for Employment of the European Commission, Nicolas Schmit; the Director General of the ILO, Guy Ryder, and the Secretary General of the OECD, Ángel Gurría. Government representatives from Austria, Belgium, Bulgaria, Cyprus, Croatia, Slovakia, Spain, France, Greece, Ireland, Italy, Latvia, Luxembourg, Portugal and Romania also participated. The event was opened by Minister of Labor and Social Economy of the Government of Spain, Yolanda Díaz; the president of Castilla-La Mancha region, Emiliano García Page, and the mayor of Toledo, Milagros Tolón.

The government and social economy sector representatives welcomed the fact that the number of European countries committed to the Social Economy has increased from eleven to eighteen. With the signing of the Toledo Declaration, these countries are committed to increasing the visibility and recognition of the Social Economy through specific policies and actions, in collaboration with the people and entities.

The Declaration also urges to promote collective entrepreneurship among young people and vulnerable groups, as well as to promote scientific research and education in the social and solidarity economy at all educational levels.

The model of economic, social and environmental development that embodies the social and solidarity economy will be promoted, supporting the generation of favourable ecosystems for the social economy and promoting synergies between public administrations and agents in the sector.

The signatory countries also commit themselves to guarantee the necessary financial support for the consolidation of a “viable and sustainable social economy”, urging the use of European funds within the 2021-2027 multiannual financial framework and the recovery funds.

Finally, they propose to strengthen the recognition of the social economy “as an essential agent for a sustainable, egalitarian and fair recovery from the crisis derived from the coronavirus pandemic; contribute to the international dissemination of this social and solidarity model by promoting exchanges of experiences, and generating mechanisms for cooperation and high-level dialogue to coordinate actions to support the social and solidarity economy”.

During the meeting, EU Commissioner for Employment and Social Rights, Nicolas Schmit, stressed that the social economy is the one in which all stakeholders are important. “It is the economy of the people,” he said.

“In this covid-19 crisis,” Mr Schmit continued, “many have lost their jobs and the social economy can provide very positive solutions. It shows us how many projects are being done to create jobs, but also how people are being served, and the possibilities created for young people and people with disabilities”.

Schmit also recalled the European Commission’s commitment to promote the Social Economy and to a “digital and green transition that is fair to mitigate the dramatic consequences of the Covid-19 on the economy”. This commitment forms part of the request made by the President of the Commission, Ursula von der Leyen, to draw up an Action Plan to promote the Social Economy, in order to achieve “a sustainable future”.

The European Commissioner also highlighted how the social and solidarity economy offers the possibility that people affected by the crisis can reintegrate into society with dignity. “We need entrepreneurs willing to carry out this action plan,” insisted Nicolas Schmit.

Portuguese Presidency of the Luxembourg Committee

For his part, the Portuguese Secretary of State for Social Security, Gabriel Bastos, took up the baton from Toledo in the capital of the Social Economy, with the “firm commitment to continue the great work of Spain in the field of social economy and the purpose of bringing solidarity to the center of public policies so as not to leave anyone behind”, he said.

Bastos announced that the dialogue for a social Europe will be the backbone of the Portuguese presidency of the Follow-up Committee of the Luxembourg Declaration, and announced the celebration in March, in a city yet to be designated, and May, in the city of Porto, of international meetings on the Social Economy and its role in the transformation towards an inclusive and fair Europe.