Cooperatives around the world celebrate the 100th edition of #Coopsday 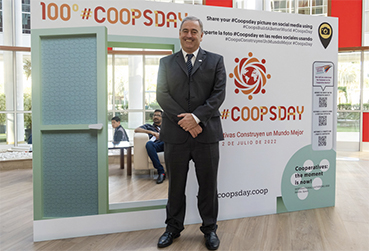 A decade after that milestone, the co-operative movement has reclaimed this slogan, reaffirming its capacity to overcome the growing social, economic and environmental challenges facing humanity. “Co-operatives always show that a different world is possible: a world with social justice, a world in harmony with nature and a world at peace”, said Ariel Guarco, President of the International Co-operative Alliance (ICA).

The cooperative movement is made up of over 3 million cooperatives with a total membership of approximately 1 billion people worldwide from all sectors and regions.

A study conducted by the ICA entitled ‘How Cooperatives Drive the Change? – A SDG Framework for Cooperatives’ (to be published this year), will explain why and how cooperatives can become unique and leading actors in achieving the SDGs.

Marked by cooperatives worldwide since 1923 and officially proclaimed by the United Nations General Assembly on the centenary of the ICA in 1995, the International Day of Cooperatives is celebrated annually on the first Saturday of July.

The aim of #CoopsDay is to increase awareness of cooperatives and promote the movement’s ideas of international solidarity, economic efficiency, equality, and world peace. Since 1995, the ICA and the United Nations through Committee for the Promotion and Advancement of Cooperatives (COPAC) have jointly set the theme for the celebration of #CoopsDay.