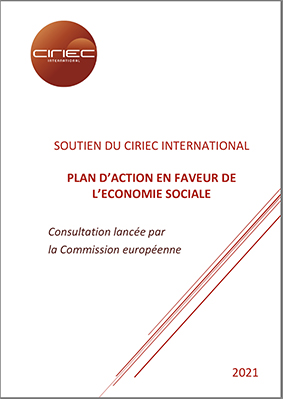 Founded in 1947, CIRIEC-International is a meeting place for academics, researchers and leaders of public and private organisations involved in the research for economic models oriented towards the collective interest, in a social and environmental context that requires us to rethink our ways of producing, exchanging, consuming and participating to solidarity.

CIRIEC considers that the social economy is one of the forms of the collective economy necessary to pursue the general interest, alongside public policy actors. CIRIEC takes the opportunity of this consultation opened by the European Commission to affirm its expectations regarding an action plan for the social economy in Europe.

Europe and the world need the social economy

The voice of the social economy has never been so necessary: we know that the answers to the global challenges of ecological and social transitions will not come from market or financial answers alone; we know that the technological changes that are taking place and the ethical questions will not find answers without taking into account the collective interest and the individuals. Everything that the social economy represents is at the heart of these issues:

Improve the understanding, visibility and recognition of the social economy

Betting on the social economy requires, first, understanding it and defining its scope, in order to make it an object of public policy.

The social economy is present, thanks to this great diversity of enterprises, in many sectors of activity, often alongside profit-oriented economic actors. Incorporated into the competitive world, social economy actors are often precursors of their activities (in banking and insurance for example), or even leaders. Sometimes hidden behind their statutes, their activities are part of our daily landscape (in commerce, culture, health, sport, training, etc., not to mention business services).

This reality, basing on tangible data in terms of GDP and employment but also on fragile statistics, is nevertheless a barrier to understanding what the social economy is and its existence at EU level. Not only is there no European definition, but only a few Member States have one (France, Spain, Portugal, etc.). Above all, the European Commission’s doctrine, despite a notable openness to the problems of the social economy in recent years, ignores this reality because of the wording of Article 54 of the TFEU, which only recognises two forms of economic activity, namely the commercial company and the non-profit company, but the latter is based on free services, a definition that is inconsistent with the realities of national actors who have market activities and who illustrate the full development potential of the social economy.

Taking into account the realities and legal specificities of social economy enterprises and organisations, in particular their non-profit or “limited profit” status, should on one hand enable them to be better integrated into general economic development policies without their status being an obstacle. On the other hand, doing so could also encourage their growth by improving their access to public contracts (especially for those enterprises that set themselves the objective of integrating people or taking into account environmental and social issues), by strengthening their cooperation with the public sector (in the organisation of the response to social and environmental needs, and in the constitution of “commons”), and by stimulating mutually enriching alliances between them or with large commercial enterprises.

At a time when our political democracies are weakened in many ways, encouraging collective forms of commitment, decision-making and innovation is a strategic challenge. In this way, the social economy is a fundamentally democratic economy: a means of economic and social citizenship, a place for collective decision-making, activities that include people… Social economy makes a major contribution to the strength of our democracies, provided that national legislation and political practices do not discourage (or repress) the action of organised civil society.

In this sense, we are also convinced that the social economy shares with the founding political project of the Union a set of common values that must be reaffirmed at a time when the Commission is considering not only a development pact for the social economy, but also the future of the European Union.