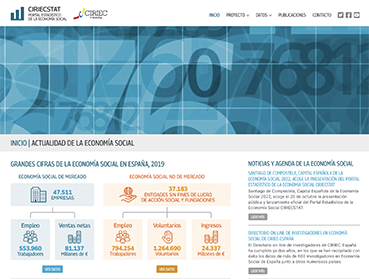 CIRIEC-Spain, in collaboration with the Centre for Cooperative Studies (CECOOP) of the University of Santiago de Compostela (USC), Spanish Capital of the Social Economy 2022, presented the latest available data on the Spanish social economy, contained in the report ‘The Social Economy in Spain in figures’ and in the new CIRIECSTAT Social Economy Statistical Portal.

The report on ‘The Social Economy in Spain in figures’ was directed by professors Rafael Chaves, José Luis Monzón and José Galán, who coordinated a group of more than 40 experts from Social Economy institutes and research centres of 16 universities.

According to the data obtained, the Social Economy in Spain comprises a total of 47,511 companies and 37,183 non-profit social action organisations and foundations. All of them directly employ 1.35 million people.

Employment in the Social Economy in Spain represents 6.75% of total employment, 8% of salaried workers and 9.91% of salaried workers in the private sector. Furthermore, according to the data provided in the presentation, the net turnover of the entire Spanish social economy is equivalent to 8.47% of GDP.

The presentation of CIRIECSTAT was made by José Luis Monzón and Ángel Soler, respectively President and Director of CIRIECSTAT. As they explained, the launch of CIRIECSTAT responds to one of the demands of the European Social Economy Action Plan, approved by the European Commission in December 2021, and which establishes as one of its key objectives to increase the visibility of the social economy through the collection of appropriate data and statistics.

In this context, CIRIECSTAT is a project that was born this year and that will grow year after year in order to, in the words of Professor Monzón “implement a system for collecting and producing statistics on the Social Economy that gathers, purifies and publishes the different statistics on the Social Economy in Spain in a single portal, in a permanent and continuous way, and with homogeneous and comparable national accounting methodological criteria”.

CIRIEC-Spain organised this presentation in Santiago de Compostela, in the framework of the Spanish capital of the Social Economy 2022, and in collaboration with CECOOP, which this year celebrates its 20th anniversary, which was celebrated on 21 October at the Faculty of Economics and Business Sciences of the USC, where it has its headquarters.