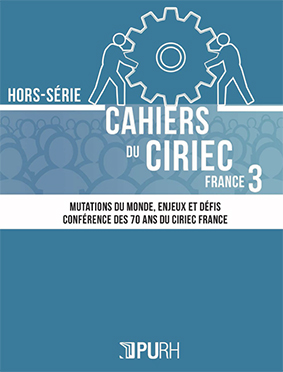 Responding to the appeal of Edgard Milhaud, founder of CIRIEC International, Léon Jouhaux, Paul Ramadier, Albert Gazier and Gabriel Ventéjol created CIRIEC-France in January 1950, with the support of leading figures of the time: Léon Blum, Édouard Herriot, Guy Mollet and Justin Godart, among others. The aim was to organise a meeting point for leaders in various positions, all working for an economy based on safeguarding the general interest and achieving true democracy. Co-operators, managers of national enterprises, local elected representatives, members of parliament, trade unionists, mutualists, researchers and academics committed to economic and social problems, all came together at CIRIEC with the common aim of studying forms of collective interest economy and promoting their results.

70 years later, CIRIEC-France is still and more than ever in this state of mind and this approach. It is still a meeting place for academics and practitioners involved in the search for economic models geared towards the collective interest.

On the occasion of this anniversary, CIRIEC-France organised a conference on the theme “Mutations du monde, enjeux et défis” (Changes in the world, issues and challenges) in such a symbolic place as the French Economic, Social and Environmental Council. It brought together, as it did from the very first day, diverse personalities as academics, local government representatives, trade unionists, mutualists and public enterprise managers, all committed to the general interest and to improve the economic system for greater equality, solidarity and democracy.

This special CIRIEC-France ‘Cahier’ collects the rich interventions of these personalities at this great event.