2022: A year of great expectations for the social economy 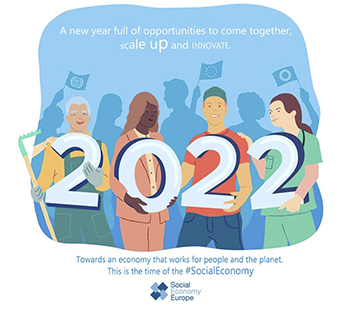 The Social Economy Action Plan was launched on December 9, although its social coming out took place on 16 December in Brussels, in an event at La Tricoterie (a cooperative) organised by the European Commission, fully respecting the current healthcare regulations.

With its 38 actions, the Social Economy Action has a 2030 horizon for its implementation, although most of the actions for which a calendar is provided are foreseen in 2022 and 2023. As it was appointed by SEE, “more than a culmination, the launch of the Social Economy Action Plan marks a new beginning, full of opportunities for the social economy to scale up, grow, innovate and continue providing collective solutions to societal, economic and environmental challenges”.

On January 1st began the French Presidency of the Council with an important agenda to accompany the success of the Social Economy Action Plan, including an EU Social Economy Conference to be held on 5-6 May in Strasbourg (with the support of the city, the EU Commission, the EESC and the Social Economy Intergroup).

A Transition Pathway for a more resilient, sustainable and digital Proximity and Social Economy Ecosystem

The European Parliament (Employment Committee, with an opinion from the Regional Development Committee) will provide a Report on the Social Economy Action Plan, a first official input from another EU Institutions aiming to accompany and support the success of the initiative. This work will be led by Jordi Cañas MEP (Renew, ES).

Of key interest too is the 33rd CIRIEC International Congress, on Public, Social and Cooperative Economy. The Congress will be held on 13, 14 and 15 June 2022 in Valencia, under the theme “New global dynamics in the post-Covid era: challenges for the public, social and cooperative economy”.

CIRIEC-Spain and CIRIEC-International invite the international community to the Congress, which is aimed at managers of public and social companies at a global level, representatives of the economic and social world, cooperative and social economy leaders, trade unionists, politicians, professionals and scientists. The Congress has confirmed the participation of Paul Krugman, Nobel Prize winner in economics, as opening speaker. Call for papers available.