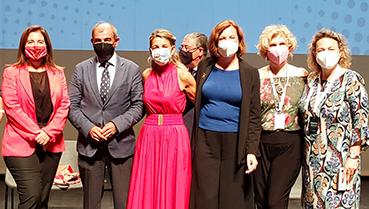 The Spanish Minister of Labour and Social Economy, Yolanda Díaz, and her Portuguese counterpart, Minister Ana Mendes, reaffirmed their commitment to the Social Economy on 8 September in the Portuguese city of Coímbra by signing a new Memorandum of Understanding and Cooperation in this area.

It is a proposal “that places people at the centre, even more so in the current context of recovery after the serious health, social and economic crisis of the Covid-19”, said Mrs Díaz in the framework of the Iberian Social Economy Summit, held in the aforementioned city, and in which she participated together with the Director General of Self-Employment, Social Economy and CSR of the Spanish Government, Maravillas Espín; the president of Social Economy Europe, Juan Antonio Pedreño; the president of CASES, Eduardo Graça, and professors María José Vañó, Gemma Fajardo and Teresa Savall (IUDESCOOP and CIRIEC-Spain), and Alvaro Garrido and Deolinda Meira (University of Coimbra).

During the summit, these professors presented the role played by universities in training in the cooperative movement and the social economy, with models such as the University of Valencia and the University of Coimbra. They also defended the promotion of social economy education at all levels of education, so that students are imbued early on, from childhood, with the values and principles of co-operation, shared by all, and the great benefits of its application in everyday life.

For the Spanish and Portuguese governments, the prominence of academic on the agenda of the bilateral summit also shows “the importance of training to continue the process of giving greater visibility to this diversified economic model, adapted to people”.

The ministers also highly valued the Iberian Social Economy Colloquia, which are periodically organised by the Spanish and Portuguese sections of CIRIEC and have been held since the early 2000s.

The new Memorandum, a firm commitment to the sector

The Memorandum is “a firm commitment to the sector and the recognition of a series of principles that will enable both countries to strengthen their relations and generate positive synergies for Social Economy enterprises as a whole”.

The text contains a series of guidelines designed to promote and develop coordinated actions to strengthen the Social Economy, which is destined to be one of the main drivers of societal transformation.

One of the lines of action is to promote the exchange of experiences on legislation and measures in the framework of the Recovery and Resilience plans and the European Social Economy Action Plan.

The two Ministers of Labour also agreed to develop joint proposals to promote the presence of the Social Economy at Iberian-American Summits, and undertook to make the Iberian Social Economy Summit a permanent event, holding it every two years.