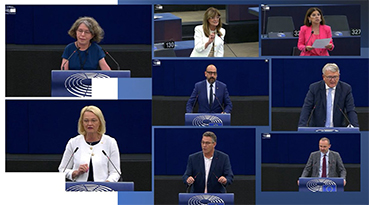 For all these reasons, Pedreño believes that “we are at a unique moment for the social economy business model that we have never experienced before”.

For an appropriate legislative and financial framework

The text approved by the European Parliament calls for a legislative and financial framework that promotes the social economy business model throughout the EU.

In addition, the proposal calls for tapping into the funding potential that the EU has put in place through the recovery plans, and investing in social economy projects that drive fair green and digital transitions.

The proposal also calls for a timetable to be set for the implementation of the Action Plan and for the horizontal mainstreaming of the social economy in all relevant EU policies, programmes and practices.

Furthermore, in order to give the sector greater visibility, governments are called upon to appoint social economy officers and to create contact points to facilitate access to finance and all tools to support entrepreneurship through a one-stop shop.

The report also proposes specific training for young people, such as a Youth Entrepreneurship Policy Academy, greater use of Erasmus Plus and Erasmus for Young Entrepreneurs opportunities and the integration of this model at all levels of education.

On the other hand, it points out that women represent more than 60% of employees in the social economy, and the wage and leadership gaps are smaller than in other models, so it calls on the Commission and the Member States to remove all barriers for women to achieve gender equality; it calls for the strengthening of the gender perspective in policies and access to funding for women involved in social economy entities.

Report on the EU action plan for the social economy