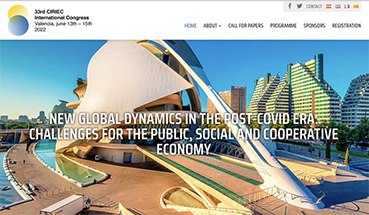 CIRIEC-Spain has received a total of 293 proposals for papers for the 33rd CIRIEC International Congress, which will take place on 13-15 June 2022 in Valencia. The final deadline for submission of abstracts was Monday 14 February. The Scientific Committee has now two weeks to examine the abstracts and decide on their validation.

The Scientific Committee of the 33rd International Congress of CIRIEC has highly valued the response of researchers in cooperative movement, the social economy and the public economy to the call for abstracts, especially in the context of the continuing pandemic. The Congress organisers are also convinced that this will be a great success and an opportunity as the first major CIRIEC Congress in the context of social and economic recovery.

The organisers also remind that participants whose paper proposals have been accepted should send the full texts of their papers by 20 April. These papers are expected to be presented in 16 parallel sessions, in which around 80 of the papers accepted for the Congress will be open for discussion.

In addition to the researchers, the Congress is aimed at managers of public and social enterprises worldwide, representatives of the economic and social world, cooperative and social economy leaders, trade unionists, politicians, professionals and scientists. The inaugural conference of the Congress will be given by Paul Krugman, winner of the 2008 Nobel Prize in Economics, and the closing conference by Mariana Mazzucato.

In addition, more than 50 experts, business executives and public sector managers will be taking part in 6 plenary sessions and 8 workshops to discuss topics of great interest such as housing and urban development, governance, partnerships between the public economy and the social economy, just ecological transition, public investment, the coverage of essential services such as energy, transport and water, innovation, sustainable development objectives, etc.

The work of this 33rd CIRIEC Congress has a threefold objective: firstly, to analyse the new techno-economic, social and environmental dynamics from the perspective of the opportunities that it confers on both the public economy and the social economy. Secondly, it aims to analyse the impact of the covid crisis on the social economy and on the public sector in general. The third objective of the congress is to analyse the concrete responses of public, social and cooperative enterprises to the socio-health crisis and to these major dynamics, with particular reference to the role of the state, both welfare and entrepreneurial.

The congress will take place at the Palau de les Arts Reina Sofía, in the City of Arts and Sciences of Valencia (www.lesarts.com/en/).