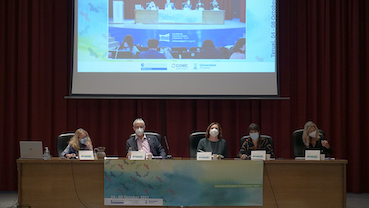 Teruel, Spanish Social Economy Capital 2021, hosted the 8th EMES Social Enterprise Conference from 4 to 7 October, with the participation of 250 people, 100 of them in person in Teruel, representing 52 countries. The Conference was inaugurated by the Second Vice-President of the Spanish Government and Minister of Labour and Social Economy, Yolanda Díaz.

In her speech at the opening of the Conference, Vice-President Yolanda Díaz highlighted the value of the social economy “as an engine of transformation that is appropriate for the important challenges of a post-pandemic world”.

“The Ministry of Employment is firmly committed to supporting the social economy ecosystem because of its capacity to deepen changes that revalue depopulated territories and undervalued available resources, which can bring this economic model closer to the youngest people and potentially vulnerable groups and those at risk of exclusion”, said the Minister.

In addition to the strong support for the process initiated with the Luxembourg Declaration, endorsed in last year’s Toledo Declaration, the Ministry of Employment has launched the Comprehensive Plan to Support the Social Economy, and has undertaken the renewal of the Council for the Promotion of the Social Economy.

At this International Conference, professionals and researchers exchanged opinions and learned from each other on topics such as the response of social enterprises and social economy enterprises to the emergence of the COVID and their proposals for the future change in the socio-economic model; the successful alternatives already being offered to the challenge of sustainability and building an inclusive society, as well as their response to depopulation and the new rurality. Sessions were also focused on PhD students and early career researchers in social economy research.

The 5 plenary sessions, 42 parallel sessions and 15 panels demonstrated the enormous potential of the social economy to support the achievement of fairer, more inclusive and sustainable societies.

Participants in these sessions included the President of the Scientific Commission of CIRIEC-Spain, Rafael Chaves; Ann Branch, Head of the Social and Inclusive Entrepreneurship Unit of the European Commission; the Director of Self-Employment, Social Economy and CSR of the Government of Spain, Maravillas Espín; Professor Millán Díaz-Foncea, from the GESES research group of the University of Zaragoza, and the President of EMES, Marthe Nyssens, Professor at the University of UCLouvain (Belgium).

The Government of Aragon was also present at this International Conference with the presence of the Regional Minister of Science, University and Knowledge Society, Maru Díaz.

Web of the EMES Conference in Teruel