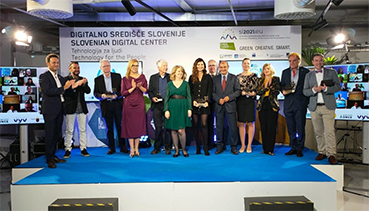 The Gala of the European Social Economy Awards 2021 took place on 12 October in Ljubljana (Slovenia). The EU Social Economy Awards are an initiative of Social Economy Europe to boost the visibility of the social economy, its organisations and entrepreneurs, and the collective solutions they propose to today’s most pressing societal, environmental, economic and technological challenges.

The nine finalists of the EU Social Economy Awards (three for each category) participated in the hybrid gala, and the winners, elected by a honorary jury, were annnounced.

Launched on October 7th, 2015 at the UNDP Social Good Summit, NeedsMap is a social and platform cooperative from Turkey, where people in need can connect with those who can help them around. A cooperative project which now aims to expand across the EU and globally. The award was collected by Güler Altınsoy Sakar (Co-Founder) and Esra Arslan (Board member) and was announced and delivered by Maravillas Espin, DG for Social Economy of the Spanish Government, and Anne-Lise Barberon, Advocay Coordinator at Groupe VYV.

Som Energia is a not-for-profit renewable energy cooperative (Rescoop) producing and distributing renewable energy across Spain. Created in 2010 by 150 citizens/members, today Som Energia has more than 75,000 members, and more than 133,000 clients and produces 24.60 GWh/per year of green energy. The Award was collected by Jaume Josa, Board member of the cooperative , long-standing activist and cooperator working for a citizen-led energy transition. The award was announced by jury members Antonella Noya (OECD, who participated online) and Vic Van Vuuren (UNTFSSE and ILO, who was in person in Ljubljana).

Czechitas is a non-profit social enterprise made up of young women and men who all share one common goal: to increase diversity in the world of IT and to fight for a higher level of digital proficiency among women and in the new generation. Czechitas motivates and educates thousands of women and hundreds of children that have discovered the world of information technology. They teach them to programme, code and work with data. Olga Maximová, Head of Nonprofit Development at Czechitas, received the Social Economy Award on behelf of the social enterprise. The award was announced and delivered to Ms. Maximová by Nena Dokuzov (Head of Project Group for New Economy and Blockchain at the Ministry of Economic Development and Technology of Slovenia) and Tadej Slapnik (Chair of the Slovenian chapter of Catalyst 2030).

SEE special awards were delivered to three social economy leaders that retired shortly before or during the COVID-19 pandemic: Jan Olsson (former Co-Chair of REVES Network, EESC member and VP of SEE), Emmanuel Verny (former General Delegate of ESS-France and VP of SEE) and Joao Leite (former Coordinator of International Relations at CASES and member of SEE Board of Directors). During his speech, Jan Olsson also paid tribute to his friend, comrade and former Chair of the European Parliament’ Social Economy Intergroup, Jens Nilsson, who sadly passed away in 2017.

SEE President also delivered a special award to his predecessor and current Vice-President of SEE (on behalf of AIM) and EESC member, Alain Coheur, who led SEE during an important transition period, in which the organisation was formally registered and changed its name from CEP-CMAF to Social Economy Europe.

The six runners’ up – ADV Foundation and Innatura for the Social Innovation Category; Consum and Staramaki for the Green Transition Category; and Suara and SOGA Europe for Digitalisation and Skills- also received artworks as an award made by artists at Créahm Liège (Belgium), an artistic and societal social economy project aiming to improve the life and support the artistic expression of individuals with intellectual disabilities and autism.

The European Social Economy Awards 2021 have been designed by the Spanish artist and cooperator José Antonio Lucas. The Award represents a rowing boat in which all of individuals, women and men of different backgrounds, join their forces to achieve a common collective or societal objective.

The first edition of the EU Social Economy Awards was possible with the support of the sponsors: Region of Murcia, CAJAMAR Cooperative Bank, VYV Group, ONCE Social Group, Hefame, CEPES and the Ministry of Economy and Technology of Slovenia.

The second edition of the European Social Economy Awards will take place in the second semester of 2023, coinciding with the Spanish Presidency of the Council.

More information and video of the Gala: https://www.socialeconomy.eu.org/2021/10/18/meet-the-winners-of-the-eu-social-economy-awards-2021/