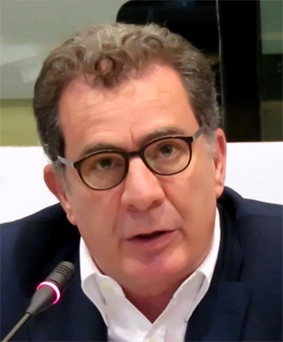 In November 2021, the International Training Center of the ILO in Turin carried out the twelfth edition of the Academy on Social and Solidarity Economy (SSE); entitled “Building back better: the role of the Social and Solidarity Economy in a people-centred and planet-sensitive recovery“. All this was possible thanks to the Portuguese government and CASES (Cooperativa Antonio Sergio para la Economia Social), in collaboration with ILO Geneva.

It was the first virtual edition and, despite many difficulties, a success. We would have loved to be physically present in one of the many beautiful cities Portugal has to offer, however, the pandemic generated by COVID-19 did not allow for this to happen.

My personal experience with the ILO SSE Academies dates back to 2010, when I was asked to coordinate the writing workshop for a reader that would serve as the basis for an SSE-related experience exchange event to be held at the end of that year. I was then asked to coordinate the writing workshop in the summer of 2010, a workshop attended by well-known SSE experts from various parts of the world, such as Bénédicte Fonteneau[1], Nancy Neamtan[2], Fredrick Wanyama[3], Leandro Pereira Morais[4], Mathieu de Poorter[5] and Jan Olsson[6].

It was a challenge that, thanks to teamwork, professionalism and dedication of the various actors involved, laid the groundwork for the realization of the first Academy. The result of the workshop was the first Reader “Social and Solidarity Economy” which turned out to be a very useful tool and remains in many ways an insightful and interesting read.

In October 2010, the first ILO SSE Academy was held on the campus of CIT-ILO in Turin: an unforgettable experience that marked the way for the eleven editions that followed.

On this occasion we organized, among other things, a convivial dinner among all the participants, experts and staff involved in the organization. At the table assigned to me, to my right sat one of the most recognized academics in Europe in the field of social economy. I had heard of him but had never met him until then, which was not strange as I had lived and worked abroad for the previous twenty years. He was Carlo Borzaga, a professor at the University of Trento, with whom I began a conversation that went on throughout dinner. The energy, competence, availability and enthusiasm of Prof. Borzaga deeply impressed me and since then I have never stopped reading his work. Over the years we have kept in touch and collaborated intensely and fruitfully with EURICSE, the Research Center of which he is president.

For ILO, whose task is to offer its constituents guidance on how to promote the creation of decent work and more inclusive and sustainable societies, academic input is crucial. Indeed, it is in the Universities and Research Centers where the rigorous collection, systematization and critical evaluation of data and information necessary for policy design and evaluation takes place. I believe that the success of the ILO Academies is also due to the alliance with universities and research centres. An example of this has been the collaboration with CIRIEC, which has provided an important contribution to all 12 editions carried out.

From 2010 to today many things have happened, and the social and solidarity economy has grown and obtained important recognition in all parts of the world. Both at the level of policies, as can be witnessed by institutional recognition, and in a broader sense, such as the examples of rapid and efficient response to crises like the one generated by COVID-19. Evidence of this is the fact that ILO constituents have decided to include in the agenda of the International Labor Conference, to be held in Geneva in June 2022, a general discussion on SSE.

The most relevant challenges the SSE faced at the start of their journey ten years ago; increased visibility, allocation of resources by governments, creation of ad-hoc social finance mechanisms, availability of reliable data, still require a lot of work.

The twelve editions of the Academy to date have been an extraordinary opportunity to bring together thousands of women and men, from over 90 different countries around the world, involved in promoting a people-centered economy. This has allowed for discussions and various points of view to come together, putting on the map what the SSE is and what it can be, and additionally promoting it in many countries in political and economic debates.

The current context, characterized by growing inequality, an increasing deficit of decent work and problems related to environmental contamination, has as its backdrop the rapid technological progress (automation), the process of ecological transition, and demographic trends, whose impact on the labor market is uncertain.

The UN Agenda 2030, specifically in point 28 states, “We are committed to fundamental changes in the way our societies produce and consume goods and services.” For this vision of the 2030 Agenda to become a reality, the structures that generate inequality and exclusion must be changed. Therefore, for the sake of social innovation, we need to change the relationships between the actors of the political and economic governance. The SSE for its characteristics of territorial roots can play an important role in innovation and, for the principles it promotes, in contributing to greater social equity, a necessary condition for strengthening democratic, inclusive and sustainable societies.

[6] Former President of European Network of Cities & Regions for the Social Economy or REVES.