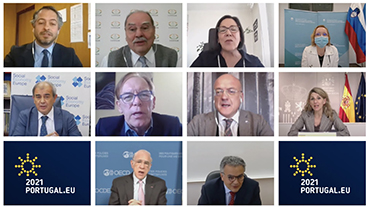 The High-Level Conference of the Portuguese Presidency of the Council of the EU entitled “The role of the Social Economy in job creation and in the implementation of the European Pillar of Social Rights” was held on March 29 in Sintra, in a hybrid format (both face-to-face and online).

Ana Mendes Godhino, Minister of Labour, Solidarity and Social Security of Portugal, explained that this year Portugal also holds the Presidency of the Monitoring Committee of the Luxembourg Declaration, affirming their national and European commitment to promote the social economy as a decisive factor of progress in economic and social terms for everybody. She said that we must fight to tackle vulnerability and job insecurity, to promote inclusion in society and the fight against inequalities. She continued that in Portugal, the social economy employs 6.4% of the people, improving the skills of employees through training, although it may have a much greater weight.

The conference proceeded to introduce the European capital of the Social Economy in 2021. This year the Presidency has assigned a Portuguese network of cities that will hold the European capital of the Social Economy. These include: Braga, Cascais, Coimbra, Sintra and Torres Vedras. The Mayors of the five cities signed a charter of common engagements for the network of cities and gave a short intervention. These five cities demonstrate phenomenal recognition of the social economy and have a strong presence of social economy organisations working for inclusion, protection of the vulnerable and promotion of social entrepreneurship and the Sustainable Development Goals.

Eduardo Graça, president of CASES which supports the creation of this network of cities, explained that local governments are a fundamental pillar for the strengthening and recognition of the social economy.

The Keynote speech was given by Giuseppe Guerini, President of CECOP and EESC member, who chair the EESC Social Economy Category. Mr. Guerini explained that the Action Plan for the EU Pillar of Social Rights is part of the green and digital transition, and that social economy organisations are ready to participate in this. He added that further recognition is imperative of how social economy organisations are both socially responsible and innovative, citing an example from Italian law.

Full video of the conference (interpretation in EU languages EN, ES, PT, DE, FR and IT):