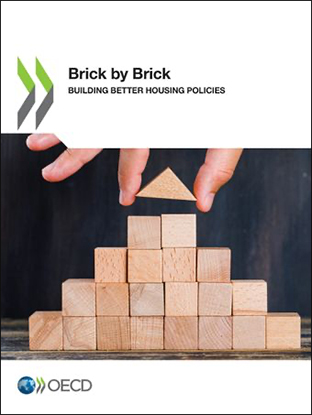 A series of reports recently published by the OECD highlight the importance of affordable housing for society and economy. Policy action is needed across the political spectrum, ranging from investment into affordable housing to land-use regulation and housing taxation. This blog post summarises some of the key findings from the Horizontal Housing Project by the OECD.

Housing costs take up an increasing part of household budgets and people are feeling the strain. Housing affordability pressures are experienced particularly by younger people, private renters, and lower-income households. Given the rapidly rising house prices and rents, the pressures are however increasingly felt also among middle-income households (termed the “squeezed middle” by the OECD). In its reports, the OECD analyses in particular the economic consequences of the current lack of affordable housing. These include reduced purchasing power and lowered economic growth due to lower disposable household incomes, stifled labour mobility due to the lack of affordable housing options in places where (better-paid) jobs are available and growing inequalities and social exclusion as a result of growing divisions in (asset) wealth.

With housing not having been one of the primary areas of concern of the OECD in the past, it is hence noteworthy how housing has gained traction within the organisation, reflecting the fact that housing affordability is no longer affecting only individual households but increasingly the wider economy, including labour markets. The OECD project has placed a particular emphasis on the role of social and affordable housing providers, organisations that are widely considered to be part of the social economy.

One of the key factors for the current crisis of affordability according to the OECD involves the substantial reduction in public spending on housing in OECD countries. The social housing stock has henceforth suffered years and decades of under-investment. With private sector rents on the rise many governments have had to increase housing allowances to support people paying expensive rents. There are however signs at the European and international level that policy makers are beginning to see the benefits of well-functioning and integrated housing systems. Housing associations as representatives of the Third sector can make a significant contribution to that. Given the budgetary constraints of the public purse in many countries, the OECD highlights so-called “revolving funds”, which are a key pillar of housing association finance in Austria and Denmark. The idea of such funds is that revenue (from rents) and any surpluses generated from an organisation’s business activity are re-invested and hence “circulate” within the non-profit system (instead of being paid out to shareholders).

The OECD is however not alone in making the economic case for more affordable housing. Various other international organisations, including the IMF (International Monetary Fund) or UNECE (the United Nations Economic Commission for Europe) have undertaken studies on the role of affordable and social housing for social inclusion, social cohesion, and economic growth. The policy solutions have been mapped out to a great detail. It is now time to implement them.