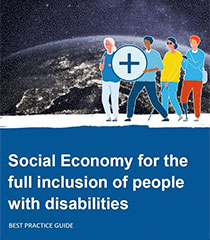 This Guide is one of several initiatives undertaken by the Social Economy and Disability Working Group of Social Economy Europe (SEE), the voice of the 2.8 million social economy companies and organizations in the EU. The Working Group was created in 2018, in order to increase the visibility and knowledge of social economy companies to generate quality employment for people with disabilities and to promote their social and labor inclusion, and internally to reinforce the approach on disability in all areas of SEE work.

The creation of the working group on the social economy and people with disabilities was a proposal of the European Center for Foundations in cooperation with the ONCE Foundation.

Impact of Covid-19 on people with disabilities

The publication also analyzes the impact of Covid-19, and it is recalled that people with disabilities “have been disproportionately affected by the crisis and social distancing measures.” This is one of the reasons why the Social Economy Europe has asked the EU institutions and governments to take into account and invest in the social economy and people with disabilities, who represent more than 15% of the European population.

The preparation of this guide has been co-financed by the European Social Fund, within the framework of the Transnational Cooperation, Social Economy and Disability (SE&D) initiative, led by ONCE Foundation, within the POISES program, Social Inclusion and Social Economy 2014- 2020.