ILO celebrates 100 years of its Cooperatives Unit with a Symposium on Social Economy, Social Justice and Decent Work 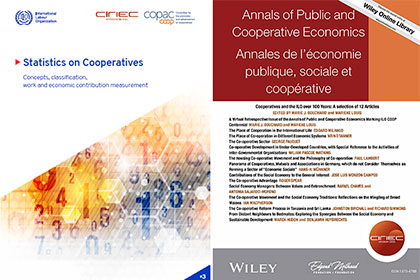 The symposium was organized by the Director of the ILO’s Cooperative Unit, Simel Esim, and was attended by the President of the ICA, Ariel Guarco, the Director of CIRIEC-International, Bernard Thiry, and the Director-General of the ILO, Guy Ryder, among many other experts.

Held virtually, the symposium highlighted the contribution of cooperatives and the social and solidarity economy (SSE) in promoting social justice, decent work and sustainable development. During the two-day virtual event, participants, researchers and practitioners, reflected on legal and policy frameworks, statistics creation, governance, sustainability, platform economy and the challenges of the future of work, among other topics.

During the meeting, two publications of great interest produced by CIRIEC were presented: ‘Statistics on cooperatives’, edited by Marie Bouchard, professor at the University of Quebec and president of the Scientific Commission for the Social and Cooperative Economy of CIRIEC-International; and a special commemorative issue of the CIRIEC-International journal, ‘Annals of Public and Cooperative Economics’ (APCE) with a selection of 12 historical articles, published in previous issues, which are a sample of the study of cooperativism as a scientific discipline.

The book ‘Statistics on Cooperatives’ is a joint initiative of the ILO, the Committee for the Promotion and Development of Cooperatives (COPAC) and CIRIEC. The book updates data from four previous studies, following the process that led to the adoption of the new Guidelines on Statistics of Cooperatives, adopted at the 20th International Conference on Labour Statistics (ICLS) in October 2018.

Along with its methodology, the book is intended to help statisticians capture and provide more information on key developments and challenges in the world of cooperatives.

‘Annals of Public and Cooperative Economics’ has been a key and ongoing resource for the ILO in its efforts to promote the work of cooperatives at the global, regional and local levels.

In its special issue to mark the centenary of the ILO’s Cooperative Unit, the magazine made a selection of 12 articles, following several rounds of screening of 176 articles published in the reviews’s more than 110-year history.

Edgard Milhaud, professor at the University of Geneva and founder of the magazine in 1908, published ‘The Annals’ using part of his salary as a professor. To ensure the continuity of the journal, in 1947 he created an association, CIRIEC, which published the review until 2017. Today, APCE is a publication of the Edgard Milhaud Foundation, promoted by CIRIEC-International in homage to its founder.