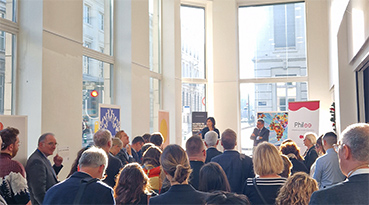 On 6 December, a new edition of Europhilantopics was held in Brussels at the Philea headquarters. Under the title “Co-creating the Future of Europe in Difficult Times”, the event brought together representatives of the European Commission, foundations and national associations of foundations in several working sessions to discuss European policies of interest to the sector, with the European Action Plan for the Social Economy as a reference initiative.

The meeting provided an opportunity to discuss the role of foundations and the potential collaboration of philanthropy and European institutions on issues such as social inclusion and the reduction of inequalities, democracy and the rule of law, and climate action, among others.

Two new studies recently published by EU institutions were discussed at the event. The first, carried out by the European Investment Bank, is the ‘Philanthropic Capital Study‘. It aims to improve collaboration between philanthropy and EU institutions, and proposes a common framework for EU institutions and foundations to achieve the European Commission’s sustainable goals.

The second, conducted by the European Commission Joint Research Centre, is on innovative ecosystems in philanthropy and crowdfunding. The study aims to place foundations in the context of the New European Bauhaus Laboratory on Innovative Financing, where Philea has a seat alongside other institutional actors.

EuroPhilantopics2022 also coincided with the celebration in the European Parliament of the tenth anniversary of Social Economy Europe, which was attended by representatives of Philea and the sector. The Philea Winter Meeting, the meeting of national associations of foundations from all over Europe, was also held during these days, which opened with a talk by Caroline Paulick-Thiel, from Politics for Tomorrow, entitled “Leveraging the work of infrastructure organisations towards regenerative futures”.