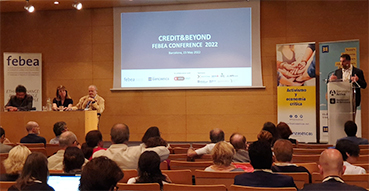 More than 120 people representing different European countries gathered in Barcelona for the annual conference of the Federation of Ethical Banks and Alternative Financiers (FEBEA). Under the title “Credit & Beyond”, the conference highlighted the work carried out by ethical finance in recent decades, as well as its aim to position itself as a financial benchmark for the social economy and a broad conception of sustainability.

According to Pedro M. Sasia, president of FEBEA, “we are financial intermediaries, but we are much more than operators in the financial market. The principles, the values, the style of operation that we are publicly committed to developing are worthwhile. It is not mere differentiation. It is not “greenwashing”, it is not “pinkwashing”, “solidaritywashing”… The approach of ethical finance, its purpose, are adapted to face the moments we have lived and are living “.

Ruth Paserman, from the European Union’s Directorate-General for Employment, Social Affairs and Inclusion, took part in the conference and said: “Ethical banking is no longer a utopia, it is now a reality. Now it is the turn of administrations. It is important that we commit ourselves, not only at the local level, but at all administrative levels, incorporating them into our management, giving determined and unequivocal support to the social and solidarity economy, because it is the one that has the social and environmental return for citizens”.

The role of public policies in promoting the social economy through ethical finance was the subject of one of the round tables at the conference. In it, Álvaro Porro (Barcelona City Council) focused on the challenges of joint work between ethical banking and administrations to overcome the mistrust that sometimes leads administrations to be unaware of what ethical banking is and how it works.

For her part, Maravillas Espín, Director General of Self-Employment, Social Economy and Corporate Social Responsibility of the Spanish Government, highlighted two challenges for the ethical finance sector. On the one hand, the need to increase its visibility and, on the other hand, to take advantage of the opportunity of a time like the present to focus investment on necessary transitions such as the digital transition or the ecological transition.

Innovative financing tools at the service of transformation

* A recording of the conference is available on the Ethical Finance Foundation’s youtube channel.