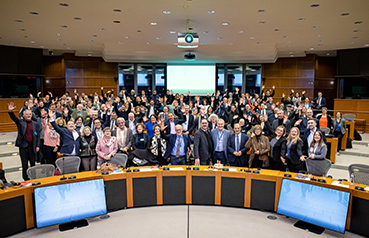 During the event, different round tables were held to analyse the main points of this plan, which sets out more than 50 measures to be implemented by 2030 in key areas such as state aid, legal frameworks, responsible public procurement, support for businesses and youth entrepreneurship, access to financing, the contribution of the social economy to the green and digital transitions, social innovation and recognition, among others. In addition, one of the objectives set by the plan is the growth of this business model in Europe, from representing 6.3% of employment to 10% in 2030.

In his speech at the opening of the event, the Commissioner for Employment and Social Rights, Nicolas Schmit, pointed out how the social economy offers answers to today’s major challenges. “It is a challenge and an opportunity, and thanks to this plan, the whole sector has made great progress. After reviewing the post-pandemic situation and sensitive situations such as the war in Ukraine, he said: “We have to draw the right conclusions: we need a strong social economy sector.

For her part, the co-president of the Social Economy Intergroup in the European Parliament, Patrizia Toia, focused on the social economy as a “great opportunity for work” and on the plan as a starting point for the digital and green transitions, “which will provide instruments to promote this economy in the different member states, by placing the social economy at the centre of decisions in Europe, and therefore in the different states”.

In the same way, the vice-president of the Social Economy Intergroup, Jordi Cañas, focused on the work done by MEPs to promote the social economy. “We are only at the beginning of this plan. We have many challenges to push us to work on. Now is the time when the social economy is at the centre of the political debate, because the crises have highlighted its role through such basic concepts as resilience. We will continue to work to make the social economy a lever of change for a fairer, more inclusive and prosperous society,” he said.

The President of Social Economy Europe, Juan Antonio Pedreño, highlighted the full recognition that this business model already enjoys, “a factory of social, economic and environmental innovation that has much to offer the future of Europe, which is already being given a leading role as a model capable of accelerating transformation processes”.

Pedreño made special mention of the challenge of attracting and accompanying young people and women to this business model, a challenge that will be overcome next year through the new academy of social entrepreneurship, which is part of the Action Plan. Another of the challenges facing the social economy, according to the president of CEPES and SEE, is to support attempts to modernise social economy legislation and policies in different EU countries.

The event also celebrated ten years of Social Economy Europe (SEE), the body that represents social economy enterprises and organisations in Europe. Juan Antonio Pedreño recalled that SEE is an organisation that, since its birth in 2012, has been committed to an economy at the service of people, to the creation of a European ecosystem favourable to these companies and to participating in the implementation of the main EU policies.

In these 10 years, SEE has grown from 9 entities that constituted it in 2012 to 23 members today. On the same day, SEE’s annual meeting also took place, in which the entry of three new members was approved: ADV Foundation (Romania), Techsoup Europe (Poland), and Pasekalo (Greece).

Video of the full event