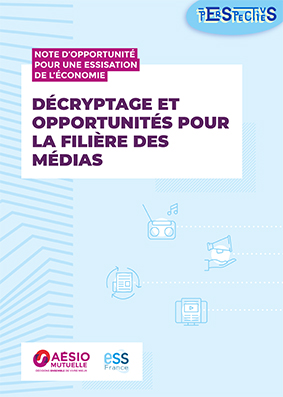 What if SSE was the media standard of tomorrow? At a time of extreme concentration of media ownership, the debate on the conditions for producing independent, free and pluralist information is more topical than ever. ESS France and Aésio Mutuelle are contributing to this debate by identifying and analysing the fundamental role of social and solidarity economy enterprises and organisations in the media field, and the place they could take in the future, with a view to democratisation.

Associations, cooperatives, mutual and foundations already represent 28% of printed press publications and community radio stations account for 68% of radio operators on the hertzian network. Whether in the press, radio, television or digital space, the role of the SSE in the media landscape is plural and often goes far beyond the simple production of information: democratisation and independence of media governance, development of alternative and locally-based editorial projects, participation of citizens in the production of content and in the financing of the media, economic cooperation and professional mutual aid, media and information education, etc. Everything indicates that when the media seize the tools of the SSE, it is to provide a democratic response to the major issues that concern their sector.

This democratisation of the media by the SSE is part of a wider process of deepening the democratic project within our society. By making the media space a place of citizen engagement its own, by questioning and reappropriating the conditions of information production, as well as by improving its quality and availability, the SSEisation of the media can contribute to the improvement of the democratic debate and to the emancipation of those who, until now, did not have access to the media space.