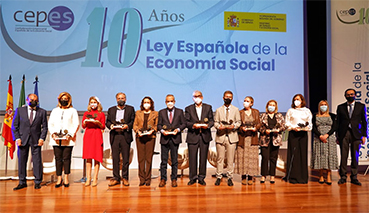 The Spanish Social Economy Business Confederation (CEPES) brought together on 17 March at the Reina Sofia National Museum of Art in Madrid, senior officials of the Spanish Government, former ministers, representatives of EU institutions and European governments, Spanish regions and the Spanish Parliament, to commemorate the 10th anniversary of the Social Economy Law, approved unanimously in March 2011 and a pioneer at international level. The event was also attended by the president of CIRIEC-Spain, Adoración Mozas; the director general and director of Social Economy News, José Luis Monzón, and the president of the Scientific Commission of CIRIEC-Spain, Rafael Chaves.

The President of CEPES, Juan Antonio Pedreño, highlighted how this Law placed Spain “at the forefront of the European Union”, as it was the first Member State to adopt a framework Law for the entire social economy. He also pointed out that Spain is currently the only country in Europe with a National Strategy for the Social Economy, which is one of the nine policy levers of the 2030 Agenda.

He also thanked the current Ministry of Labour and Social Economy for its commitment to this business model, “a commitment that will increase in the next two years and especially in the framework of the Spanish Presidency of the European Union in the second half of 2023”, said the president of CEPES.

During the event, CEPES made a series of acknowledgements, among them to the seven rapporteurs of Law 5/2011: Carles Campuzano, Esperanza Esteve, Gaspar Llamazares, Lourdes Méndez, Carmen Quintanilla, Emilio Olabarria and Joan Tardá.

He also acknowledged former Labour Ministers Celestino Corbacho, Valeriano Gómez, Fátima Báñez and Magdalena Valerio, as well as the current Second Vice-President and Minister Yolanda Díaz for their contribution to the development and promotion of this business model over the years. All of them were present at the event.

He also recognised the important role of the five General Directors of the Social Economy who have accompanied the ministers during their term of office: Juan José Barrera, Miguel Ángel García, Carmen Casero, María Antonia Pérez León and the current Director General, Maravillas Espín.

The event commemorating the 10th anniversary of the approval of the Social Economy Act had a strong international presence, specifically the Portuguese Minister of Labour, Solidarity and Social Security, Ana Mendes, who showed the Portuguese government’s willingness to build a common Iberian social economy action plan; the Italian Minister of Labour and Social Policies, Andrea Orlando, the country chairing this year’s Luxembourg Declaration Monitoring Committee, and the French Secretary of State for the Social and Solidarity Economy, Olivia Grégoire, who recalled the need to define a solid legal framework for the social economy in the different European countries.